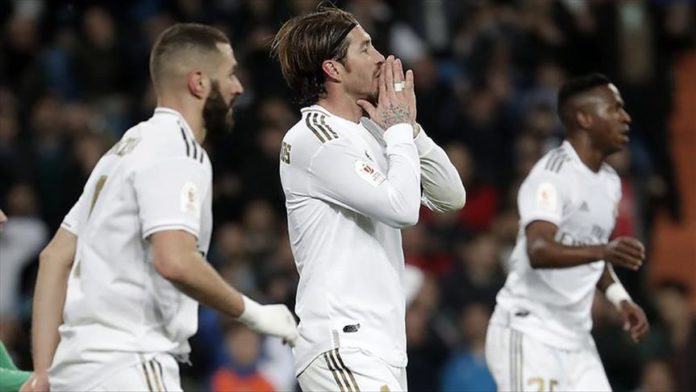 Real Madrid took over the top spot in the Spanish La Liga on Sunday, beating Real Sociedad 2-1 at Anoeta Stadium, where Sergio Ramos became the top goalscoring defender of the league’s history.

The previous record holder was a former Barcelona player, Ronald Koeman as the ex-Dutch defender scored 67 goals in the La Liga.

Shortly after, record-breaking Ramos had to leave the pitch over a collision with Real Sociedad’s Alexander Isak, Eder Militao came on in the 60th minute.

Sociedad’s late-effort was not enough to scrape one point from the current league leaders as Spanish midfielder Mikel Merino was scorer, 1-2.

Both Real Madrid and Barcelona now have 65 points, with eight weeks to go in the league.

Atletico Madrid and Sevilla aren’t in the race for the 2020 championship but they are competing for the third place.

Third-placed Atletico and Sevilla, who are in the fourth spot, have 52 points.