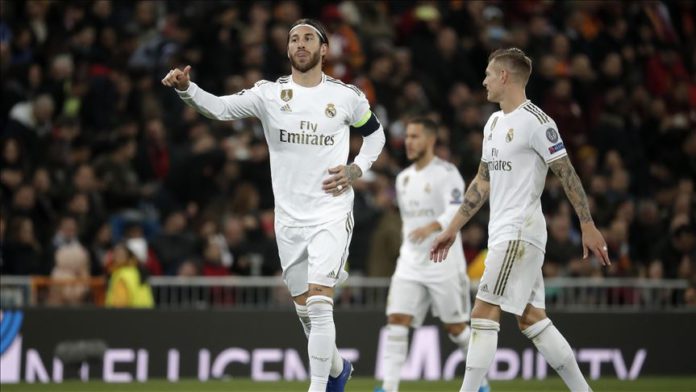 A former Sevilla player, Ramos had 659 appearances in his 15-year spell at Real Madrid.

“It’s not every day you get your 100th goal and all the more so when you’re a defender. We’ve picked up a vital win,” Ramos remarked after the win.

He scored his 100th goal for Real Madrid with a header.

The Spanish powerhouse won against Inter 3-2 in Tuesday’s UEFA Champions League Group B match in Madrid with Ramos scoring the second goal for his team.

Ramos is likely to move to higher spots in the list near future as he is able to beat club’s former stars such as Morientes, Brazilian legend Ronaldo and Welsh right winger Gareth Bale.

Real Madrid’s all-time top scorer is world famous Portuguese superstar Cristiano Ronaldo, who tallied 450 goals for the Spanish side from 2009 to 2018.

Ramos is also the highest goal scoring defender in the history of Real Madrid.

Brazilian legendary left back Roberto Carlos scored 70 goals for the Spanish powerhouse. Carlos was a Real Madrid member in 1996-2007.

An active player at Real Madrid, another Brazilian left back Marcelo scored 38 club goals for the Spanish team to come third in the highest goal scoring defenders list of Real Madrid.

Ramos scored his first goal for Real Madrid in a Champions League match against Greek club Olympiacos in 2005.

It was 2014 when the Real Madrid skipper tallied his 50th goal for his team in a Spanish league match against Rayo Vallecano.

Real Madrid’s experienced center back reached 100th goal for the club this week, scoring against Inter.

Ramos is one of the most important players for Real Madrid and the Spanish national team.

Ramos is one of the most valuable members for the Spanish national team, having 23 goals in 175 caps.

He made his Spain debut in 2005 and still plays for his nation.

Ramos was a part of Spain’s 2010 World Cup winning squad and also helped his country to earn back-to-back UEFA EURO 2008 and 2012 titles.

EU grants €71M in aid to Palestine to fight COVID-19

'Turkey secures its orbital rights for 30 years with Turksat 5A'