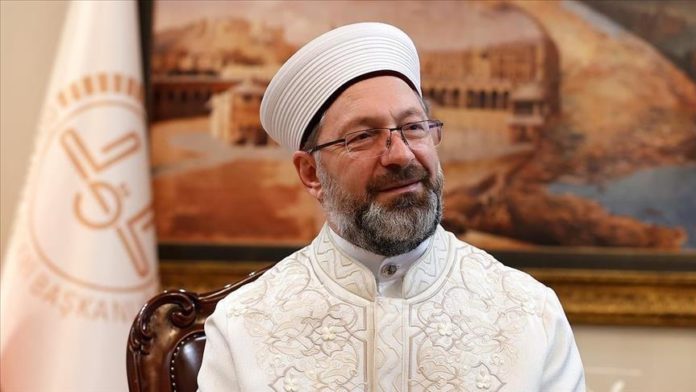 While anything entering the body breaks the fast which Muslims practice during the holy month of Ramadan, it is not invalidated by any vaccine, including the COVID-19 jab, which does not contain nutritious or intoxicating substances, according to Turkey’s top religious body.

Turkey’s Presidency of Religious Affairs issued a fatwa, an Islamic decree, in 2005 that the vaccines, which do not contain nutritious or intoxicating substances, do not invalidate the fast, the High Council of the Religious Affairs said in a statement on Monday.

Today, the views of assemblies of international fatwa are similar, it also said.

Speaking on getting the COVID-19 jab while fasting, Ali Erbas, the head of the Presidency of Religious Affairs, told Anadolu Agency that is not a new practice.

“The same fatwa was given during the Ottoman period. Since the 1930s, maybe ten fatwas have been issued in the same way,” he said.

“This is not a new fatwa. Almost all of the most important and reputable Islamic scholars in our country today share the same view.”

However, people are recommended to make a night appointment to get COVID-19 jabs, he said.

But if they have to make an appointment for receiving the shot during daytime, they can get the vaccine while fasting.

Since its vaccination campaign began in January, Turkey has administered over 19 million vaccine jabs nationwide, according to official figures.

More than 11.2 million people have received their first doses, while second doses were given to over 7.6 million.

Additionally, Eid prayers, also known as Salat al-Eid, will be performed in the mosques if the pandemic situation allows, Erbas said, adding: “I hope the number of COVID-19 cases will drop in Ramadan.

“It seems to me that the cases are in a certain downtrend. This is in direct proportion to the measures taken by our nation,” he said.

Muslims are required to donate a portion of their wealth during Ramadan, which is called zakat, or mandatory alms-giving. They believe it purifies, increases and blesses the rest of their wealth.

Urging people paying zakat to be a little more generous, Erbas said zakat, as one of the five pillars of Islam, plays a significant role in maintaining social stability in the world.

“Turkey has a very high potential for alms-giving,” he said, adding according to the researchers, if those obliged to pay alms gave them properly, there would not be a poor person in the world.

Turkey has the potential of raising only $55 billion via alms-giving, while it is $10 trillion across the world, he added.

In the face of rising COVID-19 infections and fatalities, Turkey recently announced the return of weekend curfews in high-risk areas, as well as other restrictions, in addition to special measures for Ramadan.

Turkey’s overall case tally is over 3.9 million, while the nationwide death toll topped 34,000 and 3.37 million recoveries were recorded.

Since December 2019, the pandemic has claimed over 2.94 million lives in 192 countries and regions.

More than 136.6 million cases have been reported worldwide, with recoveries surpassed 77.8 million, according to figures compiled by the US’ Johns Hopkins University.