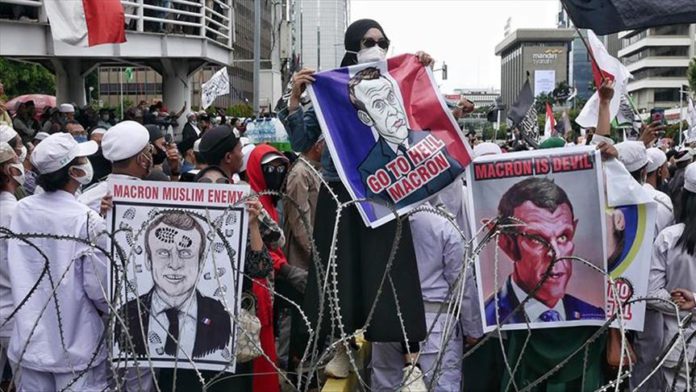 Thousands of people on Monday flocked to the streets around the French Embassy in Indonesia’s capital Jakarta, protesting against French President Emmanuel Macron’s anti-Islam remarks.

The rally, organized by the Islamic Defenders Front (FPI) was attended by people from Jakarta, Bogor, Depok, Tangerang and Bekasi.

In a written statement, FPI Chairman Ahmad Shabri Lubis said that the blasphemous caricatures of Prophet Muhammad was an insult to Muslims.

“This act is an aggression against Muslims,” said Lubis, calling on Muslims to unite against all kinds of anti-Islam acts.

Protesters carrying posters and banners called for a boycott of French products.

Muhammad Fachrul Faizaldi, one of the protesters, said he joined the rally to condemn the French president’s remarks. “We, Muslims, are here to tell Macron to be more careful in your words,” Faizaldi told Anadolu Agency.

Over the past week, protests have also taken place in major cities in Indonesia, including Medan, Bandung, Yogyakarta, Semarang, Solo, Surabaya and Makassar.

“Indonesia strongly condemns the statement of the French President which insults Islam, which has hurt the feelings of Muslims around the world that can divide the unity of the world’s religious believers at a time when the world needs unity to face the COVID-19 pandemic,” said the Indonesian leader at the State Palace in Jakarta.

Earlier last month, Macron described Islam as a religion “in crisis” worldwide and vowed to issue a bill in December to strengthen a law that officially separated church and state in France.

Tensions escalated after the brutal murder of teacher Samuel Paty who showed provocative cartoons to a class of middle school students, and insisted that it was freedom of expression.