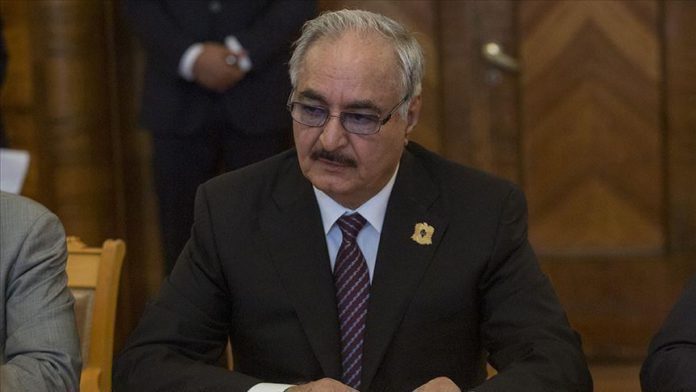 As a renegade Libyan general seeks to stave off a pair of civil lawsuits in a US court accusing him of responsibility for mass atrocities, he has chosen a risky legal defense, claiming he is immune from legal action under his alleged status as Libya’s head of state.

Khalifa Haftar is the head of eastern Libya’s Libyan National Army (LNA), which is locked in a power struggle with the internationally-recognized Government of National Accord (GNA) based in the capital, Tripoli.

The lawsuits filed in a US Circuit Court in the state of Virginia by victims’ families accuse Haftar of being responsible for gross human rights abuses, including extrajudicial killings and torture committed by his forces during the course of Libya’s civil war.

They seek millions of dollars in compensation that can be accrued from property owned by Haftar, a dual US-Libyan national who had lived with his sons Khalid and Saddam for years in Virginia after a falling out with Libya’s deceased former strongman Muammar Gaddafi.

One of the suits, filed in February, alleges that Haftar’s sons purchased 17 properties in Virginia between 2014 and 2017 worth at least $8 million, accusing them of “aiding and abetting” their father’s alleged crimes after he made them officers in the LNA following his return to Libya in 2011 after Gaddafi’s death.

“Since they took over the LNA, Defendants have waged an indiscriminate war against the Libyan people,” the February lawsuit says. “All three Hifter Defendants are jointly and severally liable,” it added, using an alternate version of the warlord’s name.

The legal document points to a series of human rights violations perpetrated during the course of “Operation Dignity,” a 2014 offensive Haftar led on the city of Benghazi, that allegedly included abuses against the plaintiffs’ family members, who contend they cannot seek remedy in war-torn Libya.

In court documents filed on Aug. 20, Haftar’s defense team seeks to have the case thrown out under the premise that he is entitled to immunity as Libya’s head of state.

It points in particular to a telephone conversation Haftar had with US President Donald Trump in April 2019 in which the White House said Trump “recognized Field Marshal Haftar’s significant role in fighting terrorism and securing Libya’s oil resources.”

“In light of the deference that must be afforded to the President to recognize the leader of Libya, the Court should dismiss this action because it cannot exercise personal jurisdiction over Gen. Hifter to the extent he holds head-of-state immunity,” the court document says.

The contention was previously rejected in the February filing by the plaintiffs, who said he is not Libya’s head of state and “is not recognized as such by either Libya’s government or the U.S. Department of State.”

Asked specifically whether the Trump administration views Haftar in any way as Libya’s head of state, a State Department spokeswoman who spoke on condition of anonymity told Anadolu Agency, “there has been no change to the U.S. position with regard to recognition of the Libyan Government of National Accord.”

“The Libyan Political Agreement and its associated institutions, including the GNA, are the sole internationally recognized framework for Libya’s governance and political transition, as affirmed by the UN Security Council,” she said.

Haftar’s legal team additionally argues that the plaintiffs are presenting a “political question” ill-suited to be resolved by the courts and that their clients were not properly served notice of the lawsuit.

Kevin Carroll, a lawyer for the plaintiffs, said in a brief email exchange with Anadolu Agency that the “victims’ families look forward to replying in court next month.”