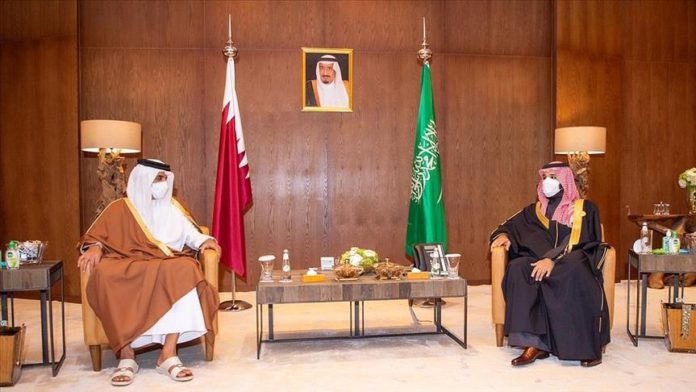 The phone call came after bin Salman underwent a surgery for appendicitis on Feb. 24.

The two also “discussed the latest regional and international developments,” while noting “their keenness to promote joint Arab and Gulf action,” it said.

Al Thani also affirmed Qatar’s support for all “that would enhance the security, stability and sovereignty of the Kingdom,” the statement said.

The Iran-aligned rebels have repeatedly announced rocket and drone attacks on Saudi territories in response to what they say is a Saudi-led assault on Yemen.

Yemen has been beset by violence and chaos since 2014, when Houthi rebels overran much of the country, including the capital, Sana’a. The crisis escalated in 2015 when the Saudi-led coalition launched a devastating air campaign aimed at rolling back Houthi territorial gains.

Saudi Arabia, the United Arab Emirates, Bahrain and Egypt signed a reconciliation deal with Qatar during a Gulf Cooperation Council summit on Jan. 5 to end a more than three-year feud.

The four countries severed diplomatic and trade relations with Qatar in 2017, accusing Doha of supporting terrorism.

Qatar has vehemently denied the accusation, saying the land, sea and air blockade was an attempt to infringe on its sovereignty.