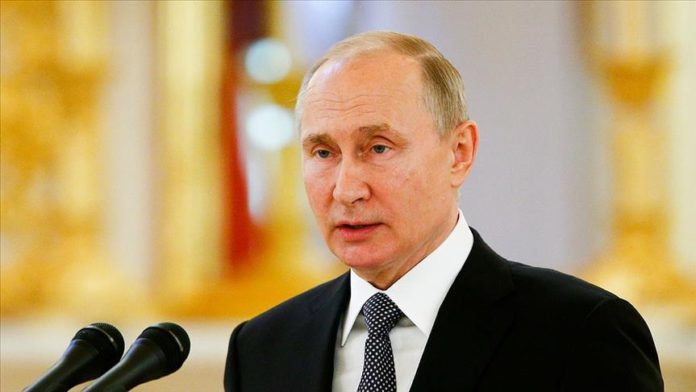 Russian President Vladimir Putin responded to the critical remarks of his US counterpart Joe Biden on Thursday.

Asked what he would answer to Biden’s accusations, Putin said he wishes him “good health,” stressing that he said that without any irony.

“As for the statements of my American colleague. How would I respond to him? I would say to him: “Be healthy!” I wish him good health,” Putin said at a video conference in Moscow.

Putin went on saying that there is a proverb with a deep psychological meaning, “I’m rubber, you’re glue. Your words bounce off me and stick to you,” that when someone labels another person with some definition, he reveals his true nature.

“We always see our own qualities in the other person and think that he [this person] is the same as we are,” he said.

But the Russian “genetic code” is different from that of the US ruling class which solves its domestic and foreign tasks by “loudly accusing other countries,” Putin added.

He claimed that the US establishment has a specific mentality, formed in difficult conditions linked to the genocide of the local population and that such an attitude continued till today.

“To this day, African Americans face injustice and extermination. And all this goes through history, to this day accompanies the life of the United States.

“Otherwise, where would the Black Lives Matter movement come from,” he said.

Putin also said the US is the only state in the world that used a nuclear weapon against another — non-nuclear — country, referring to the US attacks on Hiroshima and Nagasaki at the end of World War II.

“There was absolutely no military sense in it. It was direct extermination of the civilian population,” he said.

Commenting on the Russian-US relations, Putin said Washington wants to tackle the issues based on its own conditions.

But Moscow will defend its interests and continue cooperating with the US based on Russian conditions, Putin said.

In a pre-taped interview with the ABC News network aired on Wednesday, Biden affirmatively responded to a question whether he considered Putin “a killer.”

Biden also said there is a price to pay for interference in US affairs.

His comments came on the heels of a US intelligence report bolstering longstanding allegations that Putin was behind Moscow’s interference in the 2020 US presidential election — an accusation rejected by Russia.