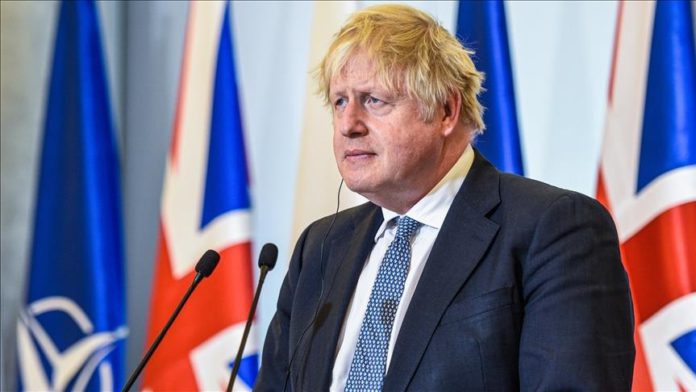 British Prime Minister Boris Johnson on Sunday welcomed a constructive conversation between Russian President Vladimir Putin and his French counterpart but repeated his call for Moscow to withdraw all troops from Russia’s borders with Ukraine.

In a phone call with Emmanuel Macron following his conversation with Putin, Johnson said the latter’s commitments to the French president were a welcome sign for diplomacy and that Russia still has a chance to step back from the brink of war in Europe.

“The prime minister spoke to French President Macron tonight about the situation in Ukraine. They updated one another on their respective diplomatic efforts, including President Macron’s call with President Putin today,” said a statement from Downing Street.

“The Prime Minister noted that President Putin’s commitments to President Macron were a welcome sign that he might still be willing to engage in finding a diplomatic solution. The Prime Minister stressed that Ukraine’s voice must be central in any discussions,” the statement added.

The two leaders also highlighted the importance of both Russia and Ukraine in following and abiding by the Minsk agreements signed in 2015 in order to maintain peace and stability in Europe and the need for Putin to withdraw all forces from Belarus and Russia’s borders with Ukraine.

During his visit to Germany for the Munich Security Conference, the prime minister warned that Russia was planning the “biggest war in Europe since 1945” and that an invasion of Ukraine would “echo around the world.”

Johnson, however, held out hope for a diplomatic solution to the growing crisis, a clear difference to strong ally US President Joe Biden, who has repeatedly said that Moscow is intent on invading Ukraine.

Tensions have risen dramatically in eastern Ukraine, with a growing number of cease-fire violations, multiple shelling incidents and the evacuation of civilians from the pro-Russian separatist regions of Donetsk and Luhansk.

Serbian envoy to Turkey grateful for aid to fight virus