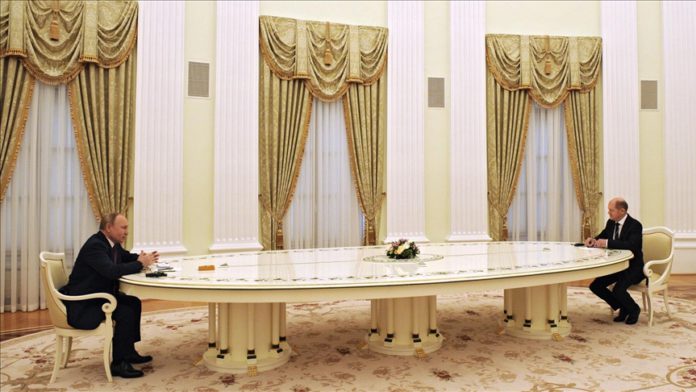 Russian President Vladimir Putin has met with German Chancellor Olaf Scholz for the first time since the latter assumed office.

Opening the meeting, Putin said the two leaders will spend much time in the meeting to discuss the security situation in Europe and the events around Ukraine.

“Today, we will devote a significant part of our time to discussing the security situation in Europe and the discussions that are now so acutely unfolding on this issue, including in connection with the events around Ukraine,” he said.

Putin pointed out that Germany is Russia’s biggest economic and one of the principal partners in Europe, despite the coronavirus pandemic, the trade turnover between the countries increased by 36% last year.

Over 100 German companies work in Russia, they invested more than $20 billion in the Russian economy while Moscow, in turn, above $10 billion into the German economy.

“We have been very closely engaged in diversifying our relations recently, and they are really developing in different directions. But, of course, traditionally, naturally, it turned out that energy is one of the priority areas,” he said.

Putin noted that Russia has been a reliable supplier of energy resources to Germany for many years.

For his part, Scholz said for him, the Russian-German relations are “something special, taking into account the history,” and also close economic ties.

“At this time, when such a difficult situation has arisen with regard to peace and security in Europe, we must communicate, as you have already done with my French colleague, and I am glad that it has now become possible that we will discuss all this. It is very important that relations between states are always resolved through dialogue,” he said.

The Russian Defense Ministry said on Tuesday some of its troops are returning to their bases as some of combat training “are coming to an end” while a large-scale Russian-Belarusian military drill will last until Feb. 20.

Commenting on reports about the Russian troop withdrawal, Ukrainian Foreign Minister Dmytro Kuleba said at a news briefing on Tuesday that Ukraine, together with its Western allies, managed to stop “further escalation of the current crisis with Russia.”

According to Ukrainian officials, Moscow recently amassed more than 100,000 troops near Ukraine, prompting fears that the Kremlin could be planning a military offensive against its ex-Soviet neighbor.

Russia also issued a list of security demands to the West, including a rollback of troop deployments from some ex-Soviet states and guarantees that some of those states would not join NATO.

In a written response to those demands, Washington said it is committed to upholding NATO’s “open-door policy,” while NATO also conveyed the alliance’s own reply “in parallel with the United States.”