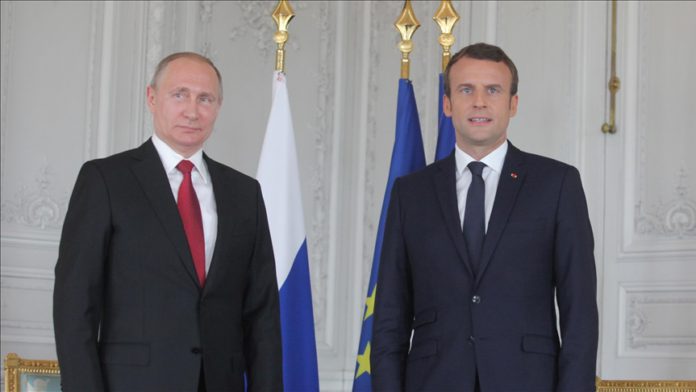 Opening a meeting with French President Emmanuel Macron in Moscow, with tensions over Ukraine looming large, Putin thanked Macron for his “active” attitude towards what he called the problems of European security.

“I understand that we have a common concern about what is happening in the security sphere in Europe,” said Putin.

He added, “I want to thank you for the fact that France has always been very actively involved in the development of fundamental decisions in this area,” meaning the security sphere in Europe.

The Russian leader then praised Macron’s efforts to resolve the Ukrainian issue and provide “equal security” in Europe.

“I see how much effort the current leadership of France and the president of France personally are making to resolve the crisis related to ensuring equal security in Europe for a serious historical perspective and to address issues that are closely related to the first part – with the resolution of the internal Ukrainian crisis in the southeast of the country,” he said, referring to the conflict-torn Donbas region.

Macron said dialogue with Russia is “the principal way of achieving stability and security in Europe.”

“We have laid the foundation for a full and open dialogue in 2019. I think that the dialogue is more relevant now than ever. This dialogue is necessary – only it will ensure security and stability on the European continent,” he said.

Macron added that in his meeting with Putin he hopes to find answers to security issues for both Europe and Russia.

“I am glad that I will be able to discuss all the issues in detail, and we will be able to start searching for a collective answer that is useful for Russia and the whole of Europe. Such a response will help to avoid war and build stability, transparency, and trust for everyone,” he said.

Russia has now amassed thousands of troops near Ukraine’s borders, prompting fears it could be planning another military offensive against the former Soviet republic.

Turkish Paralympian soldiers on at home during lockdown