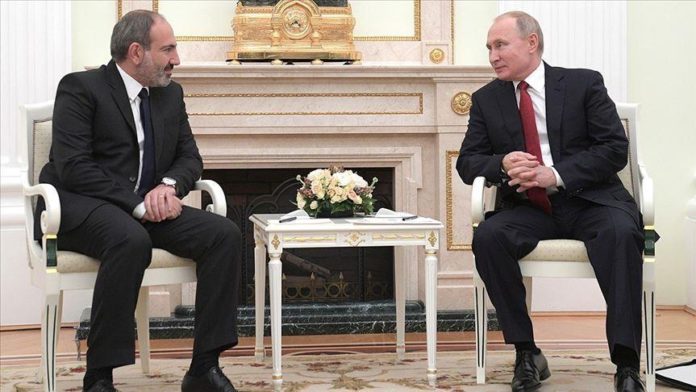 Russian President Vladimir Putin and Armenian Prime Minister Nikol Pashinyan discussed the situation in the Nagorno-Karabakh region at a meeting in Moscow on Wednesday.

Putin said ahead of the meeting that Russia is one of the principal investors to the Armenian economy, as 40% of all investments in the country are of Russian origin.

He noted that the bilateral trade turnover between Russia and Armenia dropped last year because of the pandemic, and expressed hope that it will recover soon.

Pashinyan agreed with Putin, saying the economic relations are important and that he was going to discuss with Putin the construction of a power plant in Armenia.

Praising Russia’s efforts in Karabakh, Pashinyan said “the presence of Russian peacekeepers in Nagorno-Karabakh is becoming an important factor of stability and security in the region.”

Pashinyan said the Nagorno-Karabakh problem has not been solved yet and noted that the exchange of detainees is one of the current problems.

“There is a problem that has not yet been solved. The problem is the exchange of prisoners and other detainees. They were supposed to return to their homeland, but unfortunately, they are still located in Azerbaijan,” he said.

'Turkey will continue to back Azerbaijan'