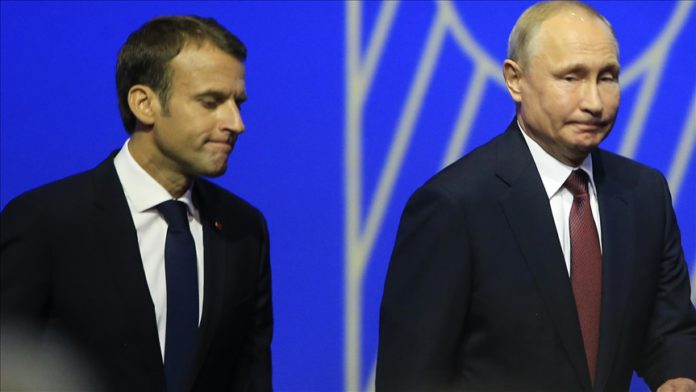 Russian President Vladimir Putin spoke by phone Tuesday with his French counterpart Emmanuel Macron on the situation in the Nagorno-Karabakh region, according to the Kremlin.

Putin underlined that conditions there have improved and the Nov. 9 agreement is being complied with, the Kremlin said in a written statement.

The two leaders confirmed their mutual readiness for further coordination on various aspects of the Nagorno-Karabakh issue within the OSCE Minsk group, the statement added.

Putin and Macron also discussed the issue of Eastern Ukraine, showing interest in activating the initiatives for the implementation of the 2015 Minsk agreements and the decisions adopted at the Normandy Summit on Dec. 9, 2019.

The Russian side emphasized that Donbas should be given a special status and the “Steinmeier Formula” should be included in Ukraine’s legislation, and both sides agreed to continue the work as part of the Normandy Format.

In 2014, Russia annexed Ukraine’s Crimean Peninsula, a move widely viewed as illegal by the international community, including Turkey and the UN.

The two leaders also discussed the situation in Syria and Libya.

They also stressed the need to combine initiatives to protect the Iranian nuclear deal.