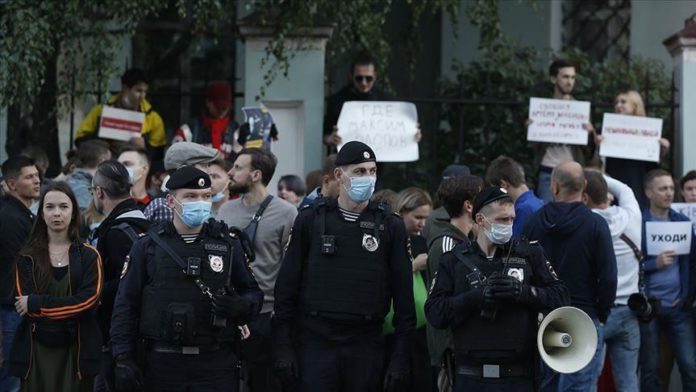 The Russian and Belarusian presidents discussed in a phone talk on Friday protests in Belarus.

Vladimir Putin and Alexander Lukashenko also spoke about the resumption of transport communications, the press service of the Belarusian leader said in a statement.

The statement noted that the heads of state discussed in detail the results of the 7th Forum of Russian and Belarusian Regions, stressing “the crucial role of direct contacts at the level of regional and enterprise leaders in bilateral relations.”

The leaders were “convinced that the positive results of this joint work should first of all be felt by the citizens of the two countries,” it added.

In a separate statement earlier, Kremlin spokesman Dmitry Peskov commented on the EU sanctions against Belarus.

He said Russia has a negative attitude to the policy of sanctions, because it is a manifestation of weakness rather than strength.

So, Russia is positive about absence of personal sanctions against Lukashenko because blacklisting the Belarusian top officials would mean cutting all Belarus-EU contacts, including on the issues of mutual interest, Peskov added.

On Friday, the EU put personal sanctions against 40 Belarusian officials, suggesting, among other things, travel ban and assets freezing.

EU Council President Charles Michel said EU leaders once again confirmed the non-recognition of the presidential elections in Belarus but will not put personal sanctions on Lukashenko because it would undermine Brussels demand for him to start a dialogue with the opposition.

Putin and Lukashenko also discussed the situation in the Upper Karabakh, or Nagorno-Karabakh region, and the growth in the number of coronavirus cases.