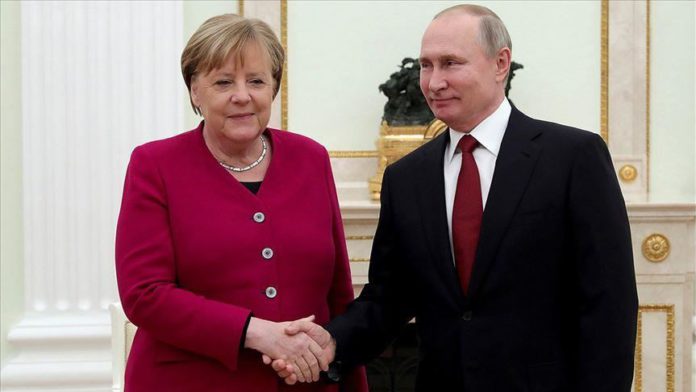 Russian President Vladimir Putin and German Chancellor Angela Merkel on Friday talked on the phone over the 75th anniversary of the end of World War II.

The two leaders stressed that for Russia and Germany this date is of particular importance, and vowed to preserve the historical memory of the tragic events of those years to avoid repetition in the future, the Kremlin said in a statement published on its website.

Putin and Merkel called Russia and Germany “partners in resolving many international problems” and confirmed the intention to further build constructive relations.

Turning to the coronavirus pandemic, both leaders expressed intention to continue the already established close cooperation in countering the spread of the infection.

In the first turn, he conveyed good wishes to the presidents of former nine Soviet republics and to “people” of Ukraine and Georgia, which once were part of the former Soviet Union but currently have tense relations with Moscow.

He also sent greetings to the leaders and people of Great Britain, the US, and France, Russia’s allies in World War II.

“The Great Victory was a pivotal event of the 20th century with enduring significance for the fate of all humankind. It was achieved thanks to the joint efforts of the Soviet Union and countries of the anti-Hitler coalition. That invaluable experience is no less needed today,” Putin said in a telegram to Johnson.

In a message to Trump, he said: “The decades since WWII have brought new threats – from terrorism and regional conflicts to large-scale natural disasters, man-made catastrophes, and epidemics. Russia and the United States are now at the forefront of the response to global challenges. Following the traditions of cooperation established in wartime and acting in the ‘spirit of the Elbe’, our countries could do a great deal for the sake of international security and stability.”

Putin told French President Emmanuel Macron that “the heroism of the Normandy-Neman Flight Regiment pilots, who fought at the Soviet-German front, will be forever in the hearts of Russians” recalling that “thousands of Soviet patriots who joined the French Resistance also made a considerable contribution to Victory”.

In Russia, Victory Day is a holiday commemorating the surrender of Nazi Germany in 1945. It was announced following the signing of the German act of capitulation late in the evening of May 8, 1945 in Berlin, when it was already time after midnight, thus May 9 in Moscow. The Soviet government declared victory early on May 9, 1945 after the signing ceremony in Berlin.