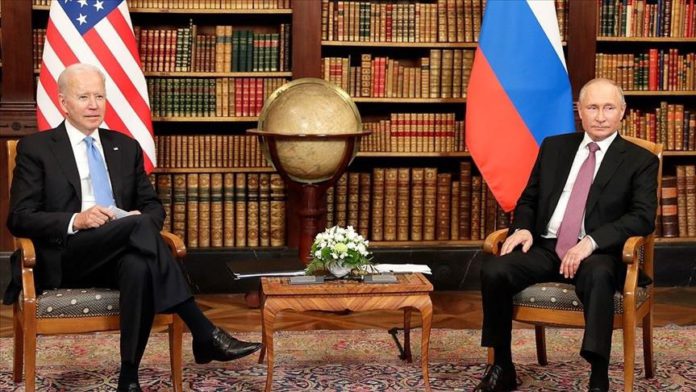 Russian President Vladimir Putin told his US counterpart he does not understand why the US president “knowingly gave false information on the invasion of Ukraine,” the Kremlin said late Saturday.

Speaking to reporters about the more than hour-long telephone call between Putin and Joe Biden, Yury Ushakov, the presidential adviser on foreign policy issues, said the meeting was “balanced” and “business-oriented”.

“Today’s meeting took place in the atmosphere of unprecedented hysteria that Russia will definitely launch an attack on Ukraine in the near future,” said Ushakov.

He claimed that allegations that Russia will attack Ukraine were made in a “coordinated” way.

“The Americans are artificially magnifying the hysteria around the so-called planned invasion of Russia, even telling the dates of the invasion, and in parallel, they are building the muscles of Ukraine together with their allies, providing financial resources to strengthen the Ukrainian army and increasing the number of military trainers sent to Ukraine,” the adviser said.

“With the alleged invasion, preconditions are created for possible provocative actions of the Ukrainian armed forces,” he said. “This is how we evaluate this situation”

Citing Biden’s thoughts, he said the US president told Putin that Washington and Moscow “must do their best to support stability and security in the world” despite being rivals.

“Biden emphasized that within the framework of the Ukraine issue, everything should be done to avoid the worst scenario,” he said.

He noted that Biden said he favors the diplomatic path.

Saying that Russia will take into account the thoughts expressed by Biden, the adviser said: “Putin pointed out that the armament of Ukraine by Western countries is dangerous. Western countries encourage the provocative actions of Ukrainian military forces in Donbas and Crimea.”

– Tension between Ukraine and Russia

The US and its allies have warned of an imminent attack and threatened Russia of “severe consequences.”

Turkiye has offered to host a peace summit between Putin and Ukrainian President Volodymyr Zelensky.