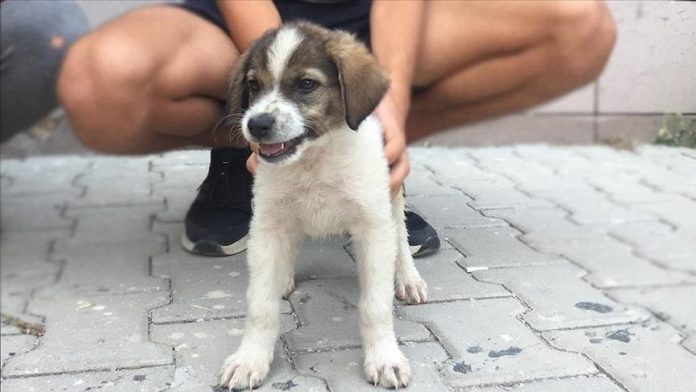 A puppy that was rescued from a fire in Manavgat district in Turkey’s southern province of Antalya has become the mascot of disaster teams working to save lives from massive blazes that erupted last week in parts of the country’s south.

Ekrem Tekin, a youth center worker who went to support the teams in the district where firefighting efforts were being carried out from the air and land, told Anadolu Agency that the pup, who has been named “Yanik” (burned), was discovered by rescuers while they were saving an elderly woman in the Gebeci neighborhood.

Tekin said they brought the puppy to the Manavgat Youth Center, which serves as a disaster coordination center.

“We were in an area of Gebeci where the fire was extinguished. A volunteer doctor went there to pick up an elderly woman. We saw the dog there, and we couldn’t bear to let it go. We brought it to the center,” Tekin said.

“He was exhausted and tired yesterday. We gave him food and water, and he recovered. Our young people here are also interested.

“He looks healthier. He became the mascot here. We called him ‘Yanik’ because we found him close to the flames,” he added.

Berkay Kose, a 17-year-old 11th grader who participated in volunteer work at the center, said he supports charity activities at the youth center, of which he is a member, and said they found their morale with a puppy brought from the fire zone.

“When he came yesterday, he was very timid and scared. He got used to us. He jumps on us and tries to bite our hands. He’s so cute. It’s been a source of morale in this environment. We also have cats. They get along well together,” Kose recalled.

In Manavgat, authorities are fighting to control the fire, which erupted in four locations on July 28, through aerial and ground operations. Local people have joined forces with the brigades to put out the fires.

Turkish Agriculture and Forestry Minister Bekir Pakdemirli said on Twitter that 119 of 126 fires across 32 cities that erupted since Wednesday are under control.

Efforts to contain the remaining fires are underway in Manavgat and Gundogmus districts of Antalya, along with Marmaris, Koycegiz and Milas districts of Mugla, he added.