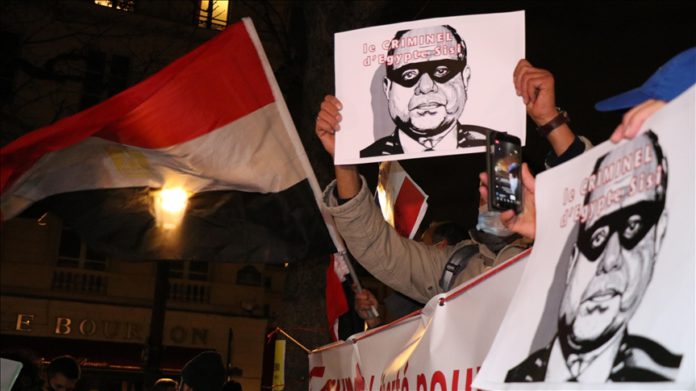 Al-Sisi was received by Macron on Monday morning at the Elysee Palace and accompanied by an escort on horseback.

The protesters, who consider al-Sisi a human rights abuser, attempted to draw attention to the human rights situation in Egypt. Al-Sisi was not inside the assembly building, however.

They gathered just after 6 p.m. in front of the lower house of Parliament on Paris’s Left Bank to decry the Egyptian leader’s presence in the capital.

They included non-governmental organizations and human rights activists objecting to Macron hosting a leader who they say has stood in violation of civil rights in his country.

There has been growing criticism of Egypt’s human rights record under al-Sisi, who came to power after toppling the country’s first elected President Mohamed Morsi in a 2013 military coup.

The previous day had seen Macron and al-Sisi meet to discuss a variety of issues, including tensions in Libya, terrorism in the region and drilling rights in the Mediterranean.

Despite having an awareness of the alleged human rights violations, Macron declared that he would not hold the issue as a factor in his decision to move forward on several fronts, paving the way for the Egyptian leader to meet with Prime Minister Jean Castex and sign deals on French development assistance and hospital and transport aid.​​​​​​​

France sold €1.4 billion worth of arms to Egypt in 2017, moving past the US as the largest arms dealer to the country.