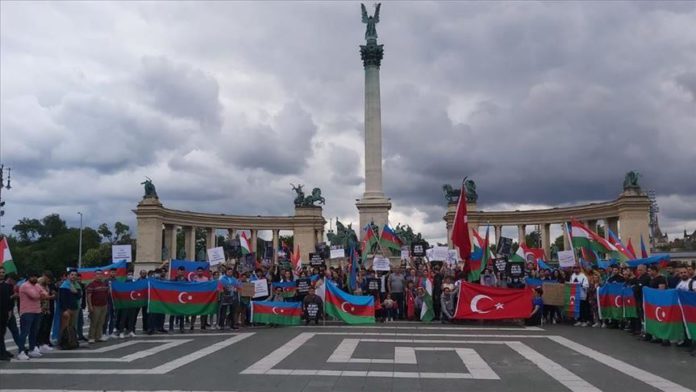 People in Hungary and Austria took to the streets on Saturday to protest Armenia’s cross-border attacks on Azerbaijan and its continued occupation of the Upper Karabakh (Nagorno-Karabakh) region.

Dozens in the capital Budapest attended the protest organized by Azerbaijani associations based in Hungary.

Ramiz Emirli, the head of the Azerbaijani-Hungarian Brotherhood Association, told Anadolu Agency that they organized the protests to announce in Europe that Armenia attacked Azerbaijan and martyred its soldiers.

Meanwhile, protesters in Vienna carried Azerbaijani and Turkish flags and chanted slogans such as “Justice for Azerbaijan”.

Armenian military attacks since last Sunday have martyred a dozen Azerbaijani soldiers. However, they have since withdrawn after suffering losses following retaliation from the Azerbaijani military.