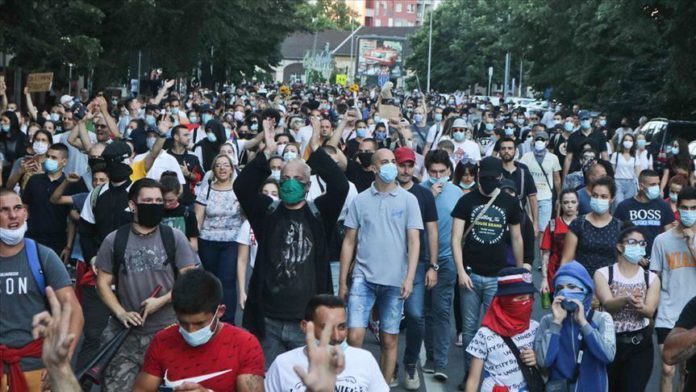 Nationwide protests against the restrictions enforced by the government to stem the spread of COVID-19 pandemic entered the fifth day in Serbia on Saturday.

The protests, which began Tuesday evening in Belgrade have spread to other major cities including Nis, Kragujevac, and Novi Sad as well.

The demonstrations erupted after President Aleksandar Vucic on Tuesday announced the return of weekend curfew among other measures to combat the pandemic.

The National Assembly Building in the capital Belgrade again became the center of protest as a crowd holding placards gathered outside the building and raised slogans against the government.

Except for a small group of protesters, most of them returned to their homes before midnight.

Protesters in Nis attempted to block the highway between the capital Belgrade and Nis, the third-largest city in Serbia, and the administrative center of the Nisava district. But the police prevented the blockade and did not allow them to proceed towards the highway.

They continued protesting in front of the police line-up and offered flowers and the Serbian flag to the police.

“We are from the same nation. Put down your shields,” the protesters were heard telling policemen as they chanted slogans against President Vucic and his government.

Novi Sad also saw a protest march. The organizers said that there would be no protest in the city on Sunday. But people can join the protests in Belgrade.

Krusevac, Cacak, Vranje, and Zrenjanin were also among the cities where protests were held.

On the first day of the protests, demonstrators clashed with police while attempting to enter the assembly building as paramilitary forces cordoned the entrance.

The protesters were dispersed after long hours.

On the second day, the protests spread to the other cities, and many police officers and protesters were reported injured.

On the third day, police claimed having arrested 70 protesters. As many as 19 people reported injuries.