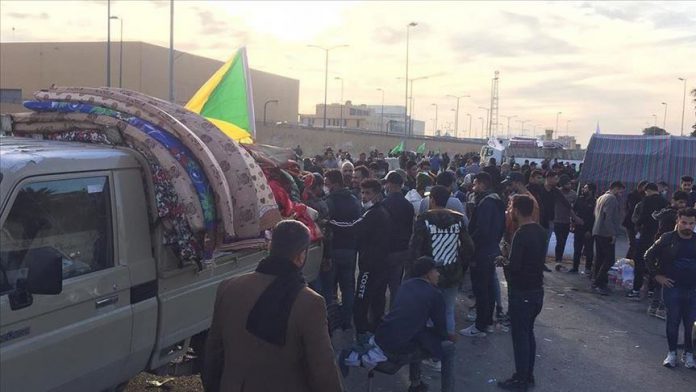 Iran-backed militias on Wednesday withdrew from the compound of the U.S. Embassy in Iraq, the Iraqi army said.

The protesters also dismantled their tents outside the Green Zone in Baghdad on the edge of the Tigris River, the Iraqi Ground Forces Command said in a written statement.

Earlier on Wednesday, in a statement, the Hashd al-Shaabi group, or Popular Mobilization Forces, an umbrella group of various anti-Daesh/ISIS militias in Iraq, urged protesters to vacate the premises.

“We call on the crowd in front of the U.S. Embassy to respect the call of the Iraqi government and to withdraw from the area for the protection of state institutions.”

The statement went on to say that the protesters had been able to deliver their message to the Iraqi government over their deep resentment against U.S. airstrikes on Kataib Hezbollah militia, which is part of the group.

After rejecting the call initially, the protesters gradually began clearing the embassy compound.

On Tuesday, thousands of Iraqi protesters stormed the U.S. Embassy compound, protesting Sunday’s airstrikes in Iraq and Syria against the Kataib Hezbollah militia which killed at least 25 fighters.

That airstrikes were in response to a rocket attack Friday on a U.S. military base in Kirkuk, blamed on Kataib Hezbollah.

Iraqi Prime Minister Abdul-Mahdi on Tuesday condemned the airstrikes on Iraqi military elements but also warned those taking part in funeral marches to stay away from foreign buildings and compounds.

“Iraqi security forces will respond to any act of aggression or harassment against foreign embassies in Iraq, and those responsible will face the full force of the law,” Abdul-Mahdi said on Twitter.

U.S. President Donald Trump on Tuesday said that Iran will pay a heavy price for any attack on the embassy in Baghdad.