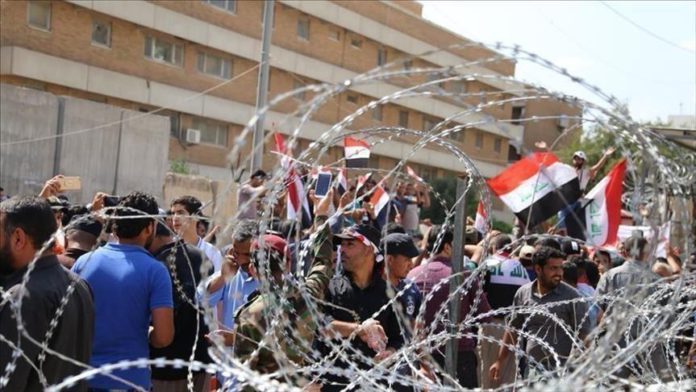 Iraqi protesters on Thursday closed three oil facilities in the southern province of Dhi Qar, protesting against the federal budget.

The new budget did not include articles to guarantee protesters’ job opportunities, a move that they responded with disruption of oil facilities.

The approval of the budget comes after the lapse of three months of the current fiscal year and it will be applied retroactively.

Eyewitnesses told Anadolu Agency that “protesters with certificates specialized in the field of oil sector closed the entrances to the Dhi Qar Oil Company, its oil refinery, and the Oil Products Distribution Company, in an escalating step.”

The eyewitnesses said: “Protesters set fire to the tires of vehicles in front of the entrances of the three oil companies and demanded urgent intervention to including them in the budget by providing them with job opportunities.”

The budget included giving permanent contracts to 8,641 people with temporary contracts only in the Electricity Ministry.

Dhi Qar is one of the hotspots for popular protests, as it is home to more than 2 million people, and a large segment of its population protests against mismanagement, poor services, and poor job opportunities.

Unemployment in the oil-rich country is estimated at 27%, and the poverty rate 25%, according to the latest statistics of the Iraqi Planning Ministry.

Iraq has been witnessing sporadic protests since October 2019 due to poor economic conditions and financial and political corruption.

March 10, 2021
We use cookies to ensure that we give you the best experience on our website. If you continue to use this site we will assume that you are happy with it.Ok