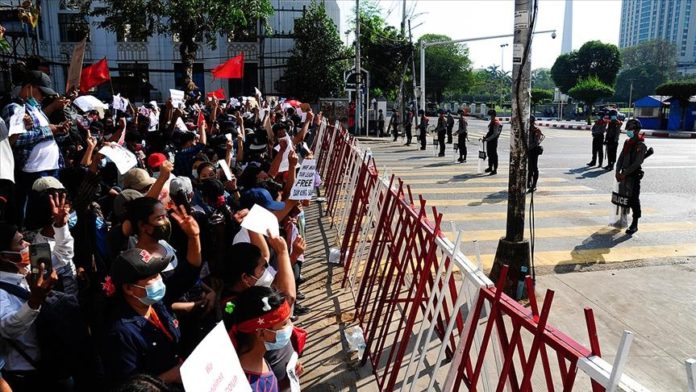 Two people shot during a police crackdown on protests in Myanmar’s capital are under treatment in critical condition, doctors said on Tuesday evening.

Some local media reports earlier in the day said a man shot by police during anti-coup demonstrations in Nay Pyi Taw had died.

The man, said to be in his 20s, was severely injured as police used water cannons and fired rubber bullets to disperse crowds of protesters, according to witnesses and media reports.

A consultant surgeon, who left the hospital by the evening, had also told Anadolu Agency that the man was shot in the chest and succumbed to his wounds.

However, two surgeons who were on duty later in the night confirmed that the man and another protester – a woman in her 20s shot in the head – were still alive and under treatment in critical condition.

Min Thu, a witness who saw the police crackdown near the capital’s Thabyay Gone junction, put the number of injured at 10.

Radio Free Asia’s Burmese Service said at least five protesters, including a woman in her 20s, were taken to a public hospital.

“A girl was shot in the chest and immediately taken to a hospital,” said another protester, who asked not to be named.

A video, in which a woman is seen being shot as police respond to protesters throwing stones, also went viral on social media.

China extends tariff exemptions on US goods for 1 year