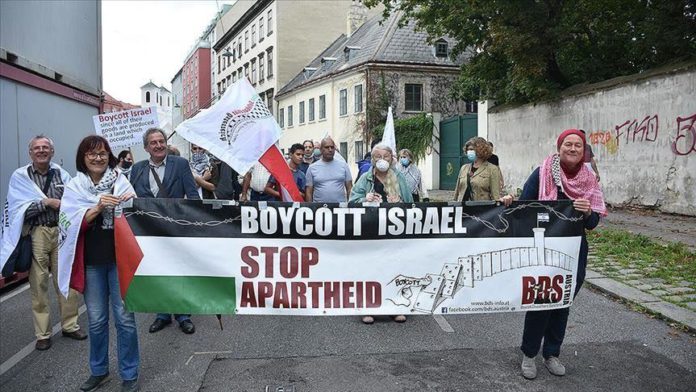 Protesters in Austria on Monday denounced Israel’s illegal actions against Palestinians and US support for Israel.

“No to occupation of Palestinian lands,” “Austria should not support Israel and US imperialism” and “Boycott Israel, no to occupation” read some of the signs held by demonstrators outside the US embassy in Vienna.

Slamming Israel’s plan to annex settlement blocs in the West Bank, protesters stressed the importance of a two-state solution.

Speaking at the gathering, a Catholic priest, Franz Sieder, said the Palestinians are the oppressed in the Israeli-Palestinian issue.

“We should not remain silent about Israel’s illegal practices against the Palestinians,” Sieder said.

He said that during the Cold War period, Austria acted in line with the principle of neutrality, but Prime Minister Sebastian Kurz developed a pro-Israeli policy contrary to the neutrality policy.

“No one can tag me as anti-Semitic because I have criticized Israel’s actions against international law,” Sieder added.

As part of US President Donald Trump’s Deal of the Century, Israeli Prime Minister Benjamin Netanyahu announced that his government would formally annex the Jordan Valley and all settlement blocs in the West Bank.

The West Bank, including East Jerusalem, is viewed as occupied territory under international law, making all Jewish settlements there as well as the planned annexation illegal.

The majority of the international community, including European Union member states, do not recognize Israel’s sovereignty over territories it has occupied since 1967.

Over 20,000 evacuated due to floods in Malaysia