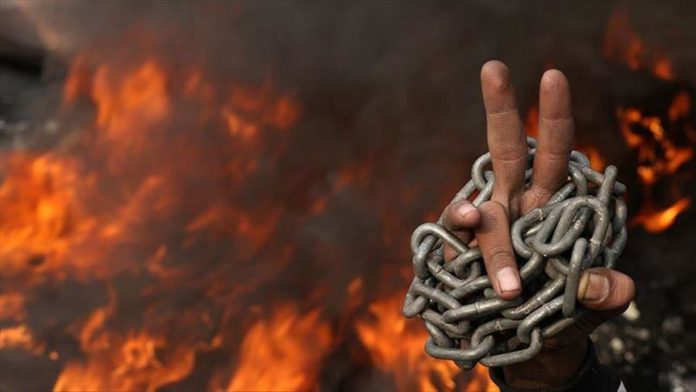 A viral video circulating on Friday shows a protester in Mexico setting fire to a police officer during a protest against police brutality on Thursday.

Protests swept over the city of Guadalajara, located in the western state of Jalisco, after 30-year-old builder Giovanni Lopez was found dead. The last time Lopez was seen was documented in a video circulating on social media earlier this week.

The video showed Lopez with police officers who were arresting him because he was not wearing a face mask. Bystanders in a small town outside of Guadalajara can be heard pleading with the police to let Lopez go. The police said he was “resisting” and violently forced him into a patrol truck.

Later that evening, Lopez’s family went to the police station to pick him up. The police told the family that he was at a public hospital in Guadalajara. By the time the family arrived at the hospital, Lopez was already pronounced dead.

He suffered blunt-force trauma to his head and had a bullet wound in his foot.

Activists say this is just the latest instance of police brutality. Enraged by the video, protesters took to the streets, burning patrol cars outside of the Governor’s Palace and writing messages demanding justice for Lopez on the walls in the historic center.

In the video circulating on social media on Friday, protesters can be seen in the historic center of downtown Guadalajara. A group of people appear to be arguing with a police officer before he attempts to leave, getting on his motorcycle.

A masked protester quickly runs up behind the officer, dousing him in what appears to be gasoline and lighting the cop on fire. The person has not yet been identified.

The Governor of Jalisco Enrique Alfaro stood by his police officers after the protests, saying they “resisted provocation.”

“There was not a single act of violence against the protesters, despite the fact that they did what I have never seen in any protest in Guadalajara,” Alfaro said.

Despite the governor’s claims, videos from Thursday’s protest show the police reacting violently toward the protesters, including one video that shows multiple police officers kicking and beating a protester as he is on the ground.