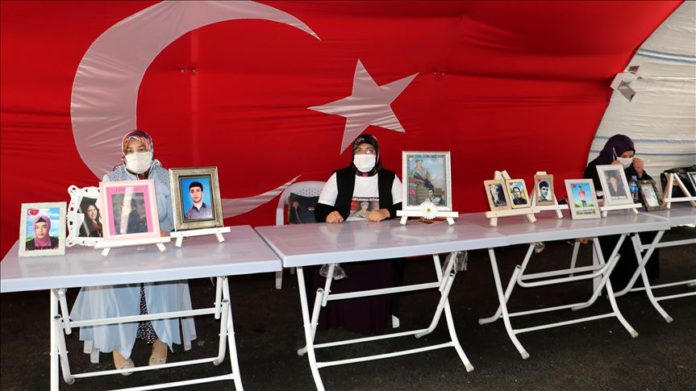 A protest sit-in by families in southeastern Turkey entered its 295th day on Tuesday, with demonstrators demanding a terror-linked political party free their children from the YPG/PKK terror group.

Dozens of mothers launched the protest on Sept. 3, 2019 outside the office of Peoples’ Democratic Party (HDP), which the government accuses of having links to the YPG/PKK terror group.

Ayten Elhaman, a mother whose child was abducted by the terror group three years ago, called on her son to surrender to security forces.

“My son, you were deceived. You’re not there with your own free will. Run away and surrender to our state’s security forces. Your friends came, you come too, I am waiting for you,” she said. “Don’t buy into the lies of the HDP. The HDP and PKK are the same.”

Urging all mothers whose children were abducted to join the protest, Elhaman said that HDP kidnaps children and then hands them over to PKK.

Aydin Dagtekin, the father of a kidnapped boy, said he will continue to stage a sit-in until he meets his son.

“I want my son back from the HDP. I won‘t leave here without my child. We’ve been here for 295 days, we will fight till the end,” he asserted.

In its more than 30-year terror campaign against Turkey, the PKK – listed as a terrorist organization by Turkey, the US, and EU – has been responsible for the deaths of 40,000 people, including women, children, and infants. The YPG is the PKK’s Syrian branch.