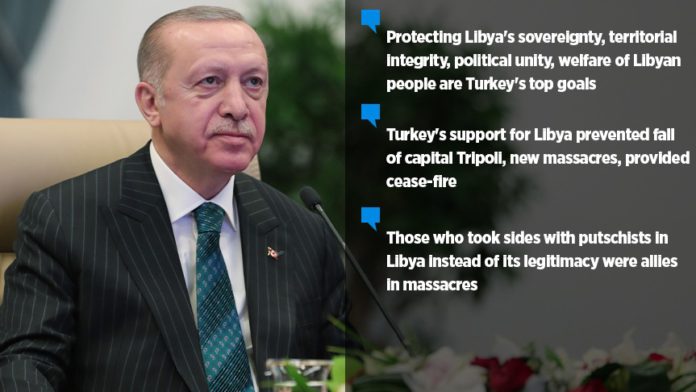 Protecting Libya’s sovereignty, territorial integrity, political unity, and the welfare of the Libyan people are among Turkey’s top goals, said Turkey’s president on Monday after meeting with the prime minister of Libya’s Government of National Unity.

At a press conference later, Erdogan said that Turkey’s support for Libya helped prevent the fall of the capital Tripoli as well as more massacres by putschists and helped provide a cease-fire.

“Those who took sides with putschists and the coup in Libya instead of its legitimacy, rights, and justice were allies in the massacres,” he said, referring to recent conflict in the country.

Erdogan said Turkey will continue giving all support to Libya’s Government of National Unity, just as it gave to the previous legitimate government.

“Steps have been taken to accelerate the return of Turkish private sector to Libya,” Erdogan said, adding that Turkey will also deliver 150,000 doses of COVID-19 vaccine to Libya on Tuesday.

He stressed that a Turkish-Libyan deal on maritime jurisdictions signed in November 2019 helped secure both countries’ national interests.

Erdogan also urged the international community to give Libya genuine support to hold its elections on Dec. 24, as scheduled. The statement said Libya’s only legitimate leadership structures are the Presidential Council and Government of National Unity chosen by elections.

The statement also declared Libya’s coordinated determination to carry out a political process leading to elections on Dec. 24, as scheduled.

The joint statement stressed the importance of Turkey’s contributions to establishing and maintaining a permanent and sustainable cease-fire in Libya.

The statement also stressed the importance of holding a regional conference to support dialogue and cooperation in the Eastern Mediterranean to guarantee parties’ rights.

Turkey’s president on Monday welcomed the prime minister of Libya’s Government of National Unity with an official ceremony in the capital Ankara. 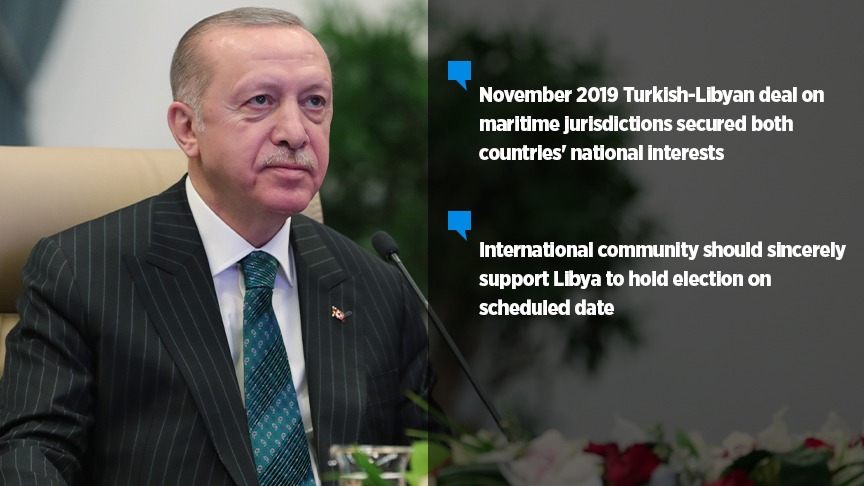 Erdogan and a senior Turkish delegation welcomed Dbeibeh and his high-level delegation – beginning a two-day official visit to Turkey – at the presidential complex.