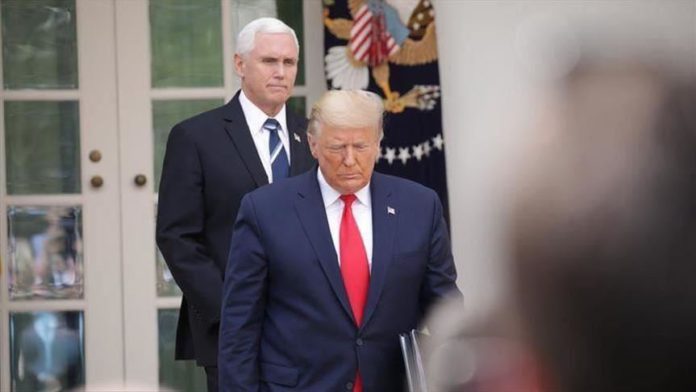 While the Republican Party has abandoned any election platform and will fawningly, say critics, adopt anything US President Donald Trump puts forth, some in the Grand Old Party (GOP) cannot stomach the commander-in-chief, his behavior and his policies.

In an unprecedented break from tradition, the defectors are instead endorsing Democrat Joe Biden.

“No president in modern history has faced such an organized opposition to his re-election by members of his own party,” opined the Los Angeles Times.

Such is the tumultuous political scene as America moves inexorably toward the Nov. 3 presidential election in just little more than two months.

Disgusted by his presidency, the GOP defectors are pouring millions of dollars into the anti-Trump battle through television ads and a social media campaign to oust the sitting president.

Political pundits are, in a word, astounded.

“We haven’t really ever seen anything like this before in a general election,” said Mitchell West, of the respected Kantar/Campaign Media Analysis Group. The organization tracks the amount the two parties spend on advertisements. It is predicting a “mammoth US$7 billion will be spent by campaigns by super Political Action Committees (PAC) on TV and digital in this election cycle,” according to the Kantar website.

Here are some of the GOP organizations and individuals who are out to unseat a perceived rogue president who, among other things, has stumbled badly with the pandemic, survived his impeachment only because it was blocked by the Republican-controlled Senate, and continues to chronically lie to the America people.

Here is a sampling of groups who are urging Republicans to vote Democrat Nov. 3.

-The Lincoln Project: Run by rebel Republican strategists, there is only one agenda – defeat Trump. The group raised more than $20 million by the end of June, rivaling Democrat super PACS. The founders include George Conway, the husband of former Trump counselor Kellyanne Conway.

George Conway said Trump’s presidency is a “clear and present danger to the Constitution and our Republic.”

The Lincoln Project has also targeted Trump backers in the Republican-controlled Senate.

-Republican Voters Against Trump (RVAT): “Trump is a singular danger as far as I am concerned,” said Tim Miller, who acts as a consultant for the organization and has deep Republican roots – he has worked for former Florida Gov. Jeb Bush, former Utah Gov. Jon Huntsman and the Republican National Committee. RVAT’s agenda is simple – deny Trump a second term. It is made up of Republicans and those who backed Trump in 2016 but who, in the words of one former Trump voter, said, “I am ashamed to this day for voting for him.”

-43 Alumni for Biden super PAC: Consisting of Republican national security specialists, the members want to snag those who supported Trump in 2016, but who have become disgusted with his actions as president.

-Republican Voters: Founded by Sarah Longwell, the group has compiled a list of several hundred thousand Trump supporters targeting a small but significant voter block – college-educated women in states like North Carolina, Arizona, Wisconsin and Pennsylvania who have become disenchanted with Trump. The group uses testimonials that say it is OK for GOP voters to cross to Biden and the Democrats.

-Never Trumpers: This group backs Biden, saying he is not bogged down by political baggage that clung to former presidential candidate Hillary Clinton. They highlight Biden’s background supporting trade and his faith, both appealing to some Republican voters.

And what has Trump to say to the turncoat Republicans?

“Watch out for them, they are human scum,” the forty-fifth president tweeted with contempt.

Besides super PACs and other organizations that pan Trump, there are high-profile Republican individuals who won’t vote for Trump in 2020. Their feelings are encapsulated in words from Miles Taylor, the former Department of Homeland Security chief of staff in the Trump administration, who urged support for Biden because Trump “wanted to exploit the Department of Homeland Security for his own political purposes and to fuel his own agenda.”

-Sen. Mitt Romney: The former Republican nominee for president in 2012 savagely criticized candidate Trump in 2016, calling him a “con man” and a “fraud.” After Trump won, Romney went to lunch with Trump and ate crow as he sought the Secretary of State plum. No doubt Trump laughed as he duped the Utah senator. Romney said in February he would not support Trump and before that he was the lone Republican senator who voted to convict Trump at the president’s impeachment trial under the abuse of power article.

Bolton says no to deals with American enemies

-The former National Security Advisor to Trump served as the US Assistant Attorney General for President Ronald Reagan. According to reports, John Bolton tried to turn Trump away from making what in Bolton’s mind were unwise agreements with enemies of America. Trump said he fired Bolton, while Bolton said he resigned.

-Jeff Flake: An enigma, in that the Arizona senator said he will not vote for Trump, but added that he has never voted for a Democrat nominee for president. Yet just days ago he endorsed Biden because Trump does not espouse conservative values and he “has not and will not change.”

-Colin Powell: The retired four-star general, highly respected in Republican circles, has moved to supporting Biden because Trump has “drifted away” from the Constitution.

-John Kasich: A frequent contributor on CNN, Kasich is the former Republican governor of Ohio and was a GOP presidential candidate in 2016. He is not only endorsing Biden, Kasich spoke at the recent Democrat convention.

-George W. Bush: The silence is deafening as he has made no statements about the election, but reports are that he will not support Trump. It is in fact a former president who will not support a current president of the same political party.

-Cindy McCain: Trump and her deceased husband, John McCain, loathed each other to the point where McCain said the president was forbidden from attending the Arizona Republican Senator’s funeral. Again, reports say she will vote for Biden, but has yet to figure out how she wants to make that public.

Whether renegade Republican PACs or individuals, they share a common goal – stop Trump at any cost.