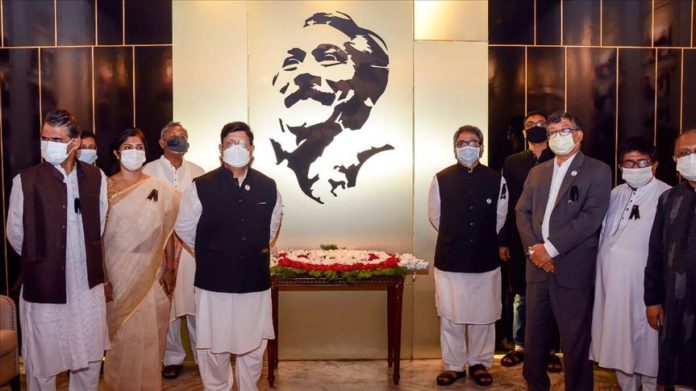 Amid the coronavirus pandemic storming through the country, Bangladesh is commemorating the 45th anniversary of assassination of Sheikh Mujibur Rahman, its founder who was brutally murdered on Aug. 15, 1975.

In honor of the country’s great leader, whose contribution to the people earned him the title “Father of the Nation,” the day is also marked as a national day of mourning.

People also designated him as “Bangabandhu”, or “Friend of Bengal” for his devotion to the countrymen.

He also served as the country’s first president and later as prime minister.

Embracing Mujib at the Non-Aligned Summit in Algiers in 1973, then-Cuban leader Fidel Castro remarked: “I have not seen the Himalayas. But I have seen Sheikh Mujib.”

Born to a Bengali Muslim family at a remote village Tungipara in mid-southern district of Gopalganj in the then-province of Bengal under the British India (now Bangladesh) on March 17, 1920, Mujib began his schooling at the age of seven at a local primary school.

He obtained a bachelor of arts degree from Islamia College under Calcutta University in 1947.

As a student at the college, Mujib started his political life in 1940 by joining the All India Muslim Students Federation and became actively involved in the movement for the creation of Pakistan.

In 1943, he joined the Bengal provincial branch of All India Muslim League (popularly known as the Muslim League).

In 1948, Mujib was admitted to the law department of Dhaka University but on March 26, 1949, then-university authorities expelled him on charges of “instigating” a movement launched by class four employees demanding rise in salaries and allowances.

University authorities, however, withdrew the expulsion order after 61 years on Aug. 15, 2010 labelling it as “undemocratic and unjust”.

On July 9, 1953, Sheikh Mujib was elected as the general secretary of the party.

Later on October 1955 the word “Muslim” was dropped from the party name and it continued as Awami League. Sheikh Mujib was reelected general secretary and served the post until 1966 when he became president of the party.

In the same year he launched his historic six-point demand that was also the charter of freedom of the Bengali nation.

Under his leadership, the Awami League secured a landslide victory in the 1970 general elections across Pakistan to form a one-party government.

The Pakistan central government, however, refused to allow him to form the government and in March 1971 President Yahya Khan postponed the National Assembly session amid huge demonstrations in East Pakistan.

On March 7, 1971, Mujib addressed a mammoth public rally in Dhaka where he called on the people to prepare for the struggle for independence. The historic speech was also recognized as part of the world’s documentary heritage by UNESCO in 2017.

Loved people more than own life

Ahmed added: “In his struggling life Mujib spent a total of 13 years in jail.”

About the brutal assassination Ahmed said that “some ill-motivated army personnel in collaboration with some defeated external enemies killed Mujib.”

Until the eve of the Liberation War, Mujib tried to reach a solution on the basis of the 1970 general election in which his party won a landslide victory that gave him a legal mandate to become prime minister of the then united Pakistan.

On March 16, 1971, Pakistani President Yahya Khan visited Dhaka for talks with Mujib on a transfer of power. The founder of the Pakistan People’s Party (PPP) Zulfikar Ali Bhutto joined them for talks a few days later.

The Mujib-Yahya-Bhutto talks continued until March 24. Yahya left Dhaka on the evening of March 25 in secrecy as the talks failed and the Pakistani army launched a crackdown on the same night.

Ahmed, however, said that Mujib wanted to keep Pakistani politicians busy so that Bengalis got a time to prepare for the Liberation War.

Formation of one party

According to some historical analysts, one major mistake of the great leader Mujib was the formation of one party, Bangladesh Krishak Sramik Awami League (BAKSAL), banning all other political parties.

Late professor of US Western Michigan University Lawrence Ziring in his book “Bangladesh: From Mujib to Ershad, an interpretive study” said: “Mujib’s fatal mistake was the fashioning of BAKSAL, on 7 June 1975. […] BAKSAL was Mujib’s way of expressing his One-Party State. Thus in a more significant way, BAKSAL was meant to serve the purpose of the Bangabandhu’s personal dictatorship, not the cause of national development and unity.”

The ruling Awami League party, however, defends the formation of BAKSAL as an essential step to lead a war-torn nation to prosperity and development.

Almost all members present at the house, including Mujib’s 11-year-old son Sheikh Russel, were also killed during the August 1975 assassination.

Mujib’s eldest daughter, Sheikh Hasina, also the current prime minister of Bangladesh for the third consecutive term, however, escaped the deadly military coup along with her younger sister, Sheikh Rehana, as they were abroad at the time.

Some former army officials pointed out the disorders prevailing in some sectors and discontents among the army during the assassination.

Former army official Maj. Gen. Moinul Hossain Chowdhury in his book — entitled A general’s silent witness: First decade of Independence — said: “It requires interpretation on how some unruly and ambitious officers were able to conduct such brutal killings.”

He said: “The popularity of the government had fallen a lot. Its impact was also in the defense sector.”

He, however, added: “Members of the military were also shocked for changing the regime through such brutal killings. […] Army commanders’ inaction to foil the coup was also a gross crime in martial law.”

PM Hasina in Mujib’s book, The Unfinished Memoirs, also focuses on her father’s love for people.

“The only vow he ever took was to bring smiles on the faces of Bengal’s impoverished people and build a golden Bengal.”

'Turkey to utilize all resources to strengthen economy'