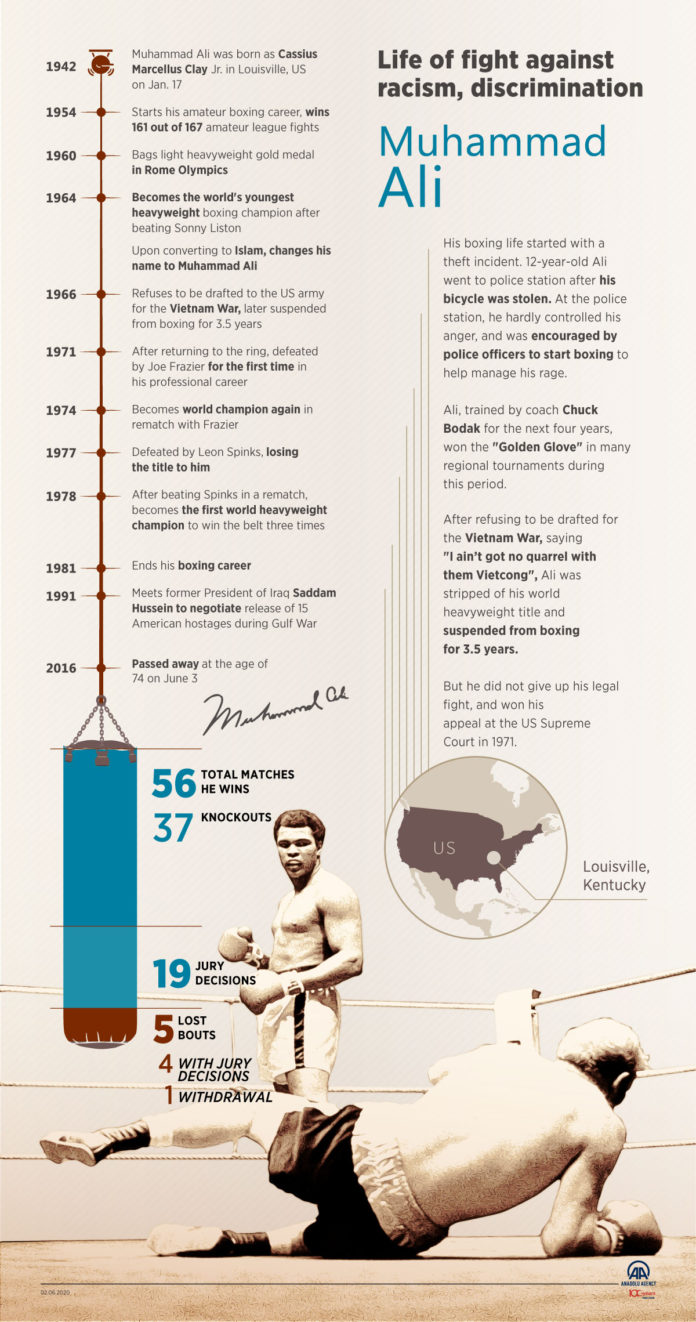 All-time “greatest” boxing legend Muhammad Ali is being commemorated Wednesday four years since his passing, not only for his talent in the ring but also his legacy in fighting racism and discrimination in the US.

Ali was born as Cassius Marcellus Clay Jr. in Louisville, Kentucky on Jan. 17.

Raised in a middle-class African American family, then 12-year-old Cassius’s life changed when his bike was stolen at the age of 12.

At the police station, he told officers he wanted to ”whoop” the thief. One of them — also a boxing trainer — encouraged Ali to enter the sport.

Ali was trained by coach Chuck Bodak for the next four years, winning Golden Gloves amateur awards in multiple regional tournaments, triumphing in 95 out of 100 fights.

Considered one of the greatest boxers who ever lived, he bagged the gold medal in the light heavyweight competition at the 1960 Olympic Games in Rome.

Upon his return from Rome, Ali threw his gold medal into the Ohio River after he was allegedly rejected service at a restaurant due to his skin color, according to his autobiography, in a powerful statement against institutionalized racial discrimination in the midst of the Civil Rights Movement.

In the 1996 Atlanta Olympics, he was given the replacement gold medal.

Defeat his rival in debut fight

Ali won 15 of his first 19 fights by knockout in the first three years of his professional boxing career, attracting the attention of the boxing community with his surge to success.

In boxing’s World Heavyweight Championship in Miami, Florida, Ali on Feb. 25, 1964, faced Sonny Liston in one of the most famous fights in the sport’s history.

Knocking down Liston in the seventh round, Ali won his first heavyweight title at the age of 22.

In Lewiston, Maine, he faced Liston again in a May 1965 restart match.

Ali knocked Liston out two minutes into the first round with an elusive jab that went down in the history of boxing as the “phantom punch.”

Ali broke yet another record by winning 161 out of 167 amateur matches in his career.

Defeated only five times in 61 professional bouts, he became world champion with 56 victories — 37 by knockouts.

The youngest World Heavyweight Boxer converted to Islam at 22 years old in 1964 after his victory over Liston.

Changing his name to Muhammed Ali, he was attracted to the religion when he joined the black movement known as Nation of Islam that was founded in the 1930s by Wallace D. Fard Muhammad.

Ali was initially affiliated with the Nation of Islam and had close relations with fellow African-American Muslim and human rights activist Malcolm X to promote Islam and defend black rights in the country.

He made headlines once again during the Vietnam War, this time not for his boxing successes but for his public criticism of the US involvement in the Southeast Asian country when he said: “I ain’t got no quarrel with them Vietcong.”

Ali refused the army draft and was sentenced to five years in prison, fined $10,000 and suspended from boxing for over three years.

It was only in 1971 that he won an appeal at the US Supreme Court.

In what was dubbed the Fight of the Century, Ali faced Joe Fraizer at the Madison Square Garden in New York City in 1971, suffering his first loss via unanimous decision.

But Ali won the next two fights against Fraizer.

Ali was defeated once more, this time by Leon Spinks in 1977, but a year later he made history as the first boxer to win three world championship titles after beating Sprinks in Las Vegas, Nevada.

Following his retirement, Ali said he would support the re-election of US President Ronald Reagan.

He met former President of Iraq Saddam Hussein to negotiate the release of 15 American hostages during the Gulf War in 1991.

As a UN Messenger of Peace, Ali visited Afghanistan’s capital Kabul in 2002 for a three-day mission to raise awareness on the UN’s activities in the country.

He was also part of a group of special guests that escorted the Olympic flag in the stadium at the opening ceremony for the 2012 London Olympics.

Married four times and the father of children, Ali died at the age of 74 on June 3, 2016, at a hospital in Phoenix, Arizona after a long battle with Parkinson’s disease.

The life of the famous boxer was adapted in a 2001 motion picture “Ali,” starring actor Will Smith, that focused on his early life between 1964 and 1974.

Death toll rises to 32 in US building collapse