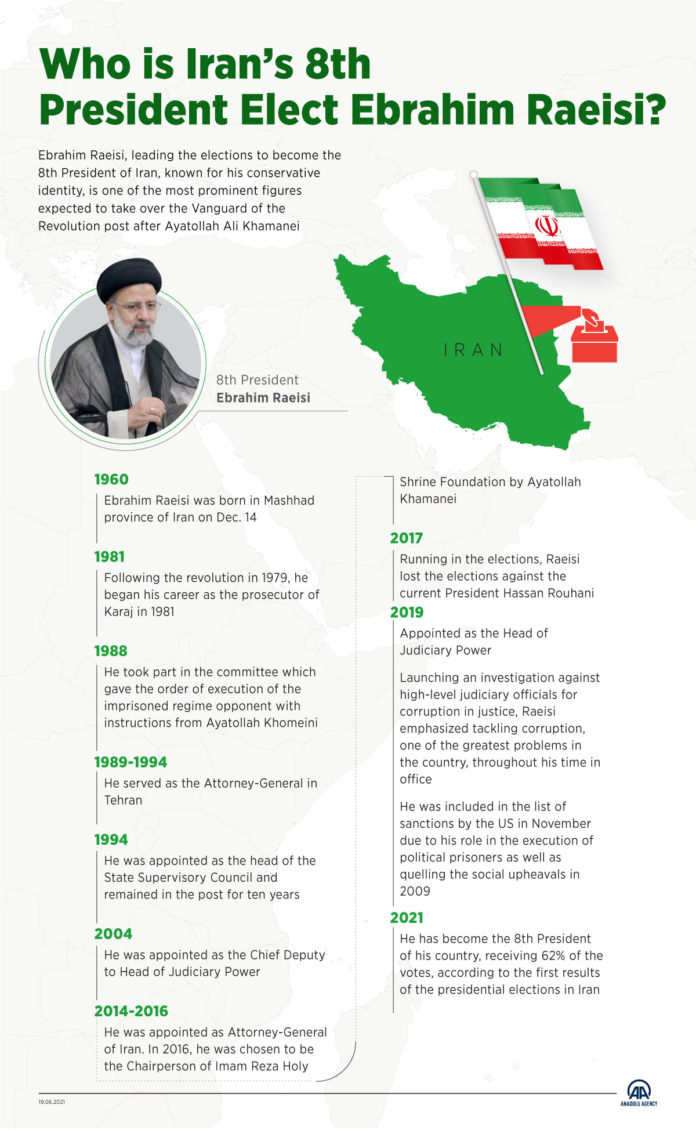 He was one of seven candidates — two reformists and five conservatives – who got the green light from the country’s top election vetting body, Guardian Council, to run in the polls.

A vast majority of candidates, including some key reformist-moderate figures, were disqualified during the vetting process last month, which paved the way for Raeisi’s hassle-free march.

Raeisi’s presidential campaign was boosted by the support of leading conservative groups in the country, who backed him over other high-profile conservative-hardline candidates in the race.

In the run-up to Friday’s poll, the two-time presidential candidate was shown as a frontrunner in various official and unofficial opinion polls, with a massive lead over other hopefuls.

Known for his anti-West stance, Raeisi has been under US sanctions since 2019.

Raeisi has held several key posts in the Iranian judiciary since the 1979 revolution, besides heading the influential Rezavi shrine complex in northeastern Mashhad province.

He served as the deputy head of the Assembly of Experts, a top deliberative body empowered to elect Iran’s Supreme Leader, since 2016.

But his major posting came in March 2019, when he was chosen by Ali Khamenei to head the country’s judiciary, replacing Sadeqh Amoli Larijani, who moved to another top body.

In his role as the judiciary chief, Raeisi’s stature and influence in the country’s conservative circles grew astoundingly, especially after he tightened the screws on corrupt government officials.

While criticizing the performance of Hassan Rouhani-led reformist government during presidential debates, Raeisi said a large number of corruption cases during his tenure as the judiciary chief was related to the executive branch.

However, he has faced criticism over the judiciary’s role in filtering social media, detention of anti-government protesters and execution of a dissident journalist.

Before taking up the top judiciary role, Raeisi also tried his luck at the country’s top executive post in 2017, when he was the main conservative challenger to Rouhani.

Riding on the hot reformist wave that time, Rouhani defeated Raeisi by a comfortable margin after garnering 23.5 million votes against Raeisi’s 15.7 million during the polls.

In this election, the tables turned in favor of the conservatives after the Rouhani government came under fire over growing economic woes and difficult living conditions.

Raeisi and other conservative candidates made the poor performance of the Rouhani government their main issue during the campaign trail, seeking a vote for “change in the status quo”.

Disqualification of key reformist figures by the Guardian Council, which stirred the hornet’s nest in Iran, further boosted the chances of Raeisi, making him the favorite.

Raeisi, a high-ranking cleric-politician, is considered a hardline conservative figure in Iran and an implacable critic of the West, in particular the United States.

He was among the close Khamenei aides to be sanctioned by the US Treasury in November 2019, thus becoming the first Iranian president to be under sanctions at the time of taking office.

In its statement, the US Treasury said it was sanctioning Raeisi for “brutal crackdown on Iran’s Green Movement protests” after the 2009 election, when Raeisi served as deputy judiciary head, and also “extrajudicial executions” of political prisoners in 1988 when he was Tehran’s prosecutor general.

A staunch critic of the US involvement in the region and its sanctions, Raeisi has pledged to “not waste a single moment” in getting sanctions lifted or neutralized. Unlike Rouhani, his approach is likely to be sterner, according to people close to him.

Raeisi has been a severe critic of the Rouhani government’s foreign policy, in particular negotiations with the West to revive the landmark 2015 nuclear deal, which was evident from his remarks in the three debates.

The judiciary chief said the removal of “cruel” sanctions will be an “obligation” for his administration, which he said will be achieved through “active economic diplomacy”, without specifying the details.

He is expected to adopt a firmer approach in Iran’s foreign policy, especially in negotiations with the US and European powers on reviving the 2015 accord.

Speculation is rife that the president-elect, with the support of conservative-held parliament, could refuse the terms agreed in recent negotiations on reviving the deal and re-negotiate on his own terms.

Raeisi, unlike Rouhani, is likely to base his approach in relations with the West and the Arab world on the directions of Khamenei, who has also been his political mentor.

In one of the presidential debates, Raeisi spoke of “interacting with the world” and “active diplomacy”, with a caveat that the progress of the country must not be tied to it.

During his electoral campaign, Raeisi spoke of many ambitious plans, but without divulging too many details about their execution.

Raeisi banked heavily on the vote of youth, urging them “not to exact revenge” from the next administration for the hardships they faced during the Rouhani government.

Describing the young generation as the country’s “most significant resource” and “driving force in the country’s economy”, Raeisi promised to focus on issues facing the youth like unemployment, high marriage expenses, and rapidly increasing housing prices.

He also emphasized the need for a bureaucratic system “to be rectified”, including the fight against corruption and red tape, while vowing to bring inflation down to a single figure by boosting production.

One of the poll promises made by Raeisi, which stirred media interest, was free internet to people from the lower strata of society, and also his advocacy of free social media.

He faced attacks from reformist candidates after his campaign team launched its social media pages, with Hemmati asking him to issue an order as the judiciary chief to lift social media filters. His campaign promises also included a review of internal government memos and regulating salaries.

Raeisi said people’s livelihood has been “heavily damaged”, adding that the country lacked “economic independence”, a salvo aimed at the incumbent reformist government.

He also referred to “land grabbing” in Iran, saying the problem can be solved through the formalization of documents, activation of NGOs, and inviting people to do observations.

The composition of his cabinet is not known yet, but observers believe he will rope in people from the conservative faction as well as some presidential candidates who dropped out of the race in his favor.