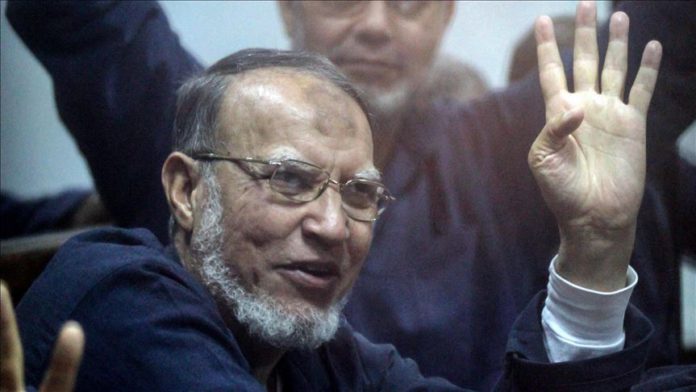 Abdel-Mon’em Abdel-Maqsoud, a lawyer for Muslim Brotherhood leaders, confirmed to Anadolu Agency his death on Thursday.

The Egyptian authorities have yet to comment on Al-Aryan’s death.

Over decades of service, Al-Aryan was known as a reformist among the Muslim Brotherhood group.

He started his life as an activist with university student unions then as a unionist and parliamentarian.

Al-Aryan was the head of the general union for Egyptian university students.

In 2012, he became head of the Arab Affairs Committee in Egypt’s parliament before being arrested in October 2013.

Al-Aryan was born on April 28, 1954, in the village of Nahya in the Giza governorship, west of Egypt’s capital Cairo.

After graduating from Medical School in 1977, he earned a bachelor’s degree in law and another bachelor’s in history in 2000, both from Cairo University.

He also studied at Al-Azhar University and earned a diploma in Sharia (Islamic law).

Among the Muslim Brotherhood, he was known as moderate and for his political initiatives, and was jailed several times for his activism.

During the 1970s, Al-Aryan was a student activist and was responsible for the Muslim Brotherhood’s student branch at Egyptian universities.

In 1986, he was elected to the board of directors for the Egyptian Doctors Association, then became the group’s assistant secretary general. During his tenure there, he was supportive of the Palestinian cause and organized several gatherings in support of Palestine.

Al-Aryan was first elected a member of parliament in 1987-1990, the youngest parliamentarian serving at the time.

He participated in many cultural and political conferences and gatherings in Europe and the US, and in Arab and Islamic countries.

As he was member of the Muslim Brotherhood’s Guidance Office, he was vice chair of the group’s political party, Freedom and Change.

Because of his political and unionist activities, Al-Aryan was subject to arrest several times for a total of seven years in jail.

He was first arrested during the rule of Egyptian President Anwar Sadat (1970 – 1981) when he served one year in prison through August 1982.

After 13 years, an exceptional military court jailed him for five years between 1995 and 2000.

He was arrested for a third time in 2006 for his participation in a protest in support of judges. He was arrested ahead of Jan. 28, 2011, the day that sparked an Egyptian revolution which deposed long-serving Egyptian President Hosni Mubarak (1981-2011).

In the course of the Egyptian revolution, Al-Aryan along with other Muslim Brotherhood leaders, including late Egyptian President Mohammad Morsi, got out from prison.

Following the military coup led by the current President Abdel-Fattah al-Sisi in 2013, he was arrested in October same year and faced a number of charges, all of which he denied.

On Thursday, the Muslim Brotherhood mourned Al-Aryan, who passed away in prison like other prominent leaders of the group such as Morsi and Mohammad Mehdi Akef.