Diego Armando Maradona, who is regarded as one of football’s greatest players ever, died of heart failure Wednesday at the age of 60 as the world mourned him.

Maradona was born on Oct. 30, 1960, in the Argentine capital Buenos Aires. Known for his pace, high technique, and dribbling skills, Maradona was a multifaceted talent on the green field as he could play as an attacking midfielder and forward.

Separately he was a regular player for the Argentine national team, where he won the 1986 FIFA World Cup in Mexico.

He also scored 34 goals in 91 international caps for Argentina.

Hand of God goal against England

Maradona was a 25-year-old captain when Argentina claimed the 1986 World Cup, scoring the famous ‘Hand of God’ goal against England in the quarterfinals.

The Argentine forward netted one of his goals with his hand against England in that match but the referee was unable to notice his trick. The goal was not disallowed for handball.

Argentina eliminated England 2-1 to march into the semis in Mexico 86.

The South American powerhouse beat Belgium 2-0 in the semifinals as Maradona scored two goals to carry his team to the final.

In addition to his World Cup victory in Mexico 86, Maradona had the runner-up medal in the 1990 World Cup.

He had 21 World Cup appearances to score eight goals and produce eight assists.

Maradona made his way to Europe in 1980s

Before his move to Spain, Maradona had played for Argentine teams Argentinos Juniors and Boca Juniors.

In 1984, he left the Spanish team to join Italy’s Napoli.

Maradona scored 115 goals in 259 matches for the Italian team.

Following his time at Napoli, Maradona made appearances for Sevilla and, Newell’s Old Boys and Boca Juniors.

Maradona had drug and alcohol addiction and a poor diet to go along with it, marring his football career and had negative impacts on his performance.

In 1991, Maradona was given a 15-month ban from the game as he tested positive for cocaine.

The former superstar was out of the 1994 FIFA World Cup in the US after he tested positive for a banned stimulant, ephedrine. Maradona was on the Argentina roster while the team was competing in the tournament.

In his absence, Argentina was eliminated in the Round of 16 by Romania 3-2 in Pasadena, California.

He failed in another test in 1997 as the Argentine Football Association (AFA) said Maradona tested positive for a prohibited substance. He was a Boca Juniors player at that time.

Following his retirement in 1997, Maradona put on weight and suffered from obesity. So he had stomach surgery in 2005.

In 2000 and 2004, Maradona had heart problems due to cocaine as he was hospitalized. In 2007 he was treated for alcoholism.

Before the psychiatric treatment, Maradona had been in hospital with “acute toxic hepatitis” related to excessive drinking and eating.

He was a legendary player but his coaching career was not that good. He failed to win any title or trophy while he was the club manager.

Argentina’s national team hired Maradona in 2008 for the 2010 World Cup in South Africa but he failed in this tournament.

Maradona’s men were eliminated in the quarterfinals over a shocking 4-0 loss to Germany in Cape Town, South Africa.

Clubs and world-famous football figures have been paid tribute to the Argentine legend.

The Argentine football body led tributes to Maradona, saying he would forever be a hero of the nation’s football.

“Maradona was, is, and will forever be a hero of our football. An emblem that knew how to bring the colors of the Argentine flag to every corner of the planet. Diego forever marked an era with his indescribable and unsurpassed talent. The soccer planet will remember you forever,” AFA added.

“I always said it and I can just repeat it now, more convinced than ever: What Diego has done for football, for making all of us fall in love with this beautiful game, is unique,” Infantino said on FIFA.com.

“I am deeply saddened to hear of the death of Diego Maradona, one of world football’s greatest and most iconic figures. He achieved greatness as a wonderful player with a genius and charisma of his own,” Ceferin said on UEFA.com.

In addition to these people, Maradona’s previous clubs offered condolences on his death.

“The world awaits our words, but there are no words to describe the pain we’re going through. Now is the time to grieve,” Napoli said.

“FC Barcelona expresses its deepest condolences regarding the death of Diego Armando Maradona, a player for our club (1982-84) and an icon of world football. Rest in peace Diego,” said Barcelona.

“A hero for an entire country and football itself. One of the greatest players to have graced the game of football, and we were lucky enough to enjoy you at Sevilla FC. Diego Armando Maradona, forever eternal. Rest in peace,” said Sevilla.

Alberto Fernandez talked to local newspaper Clarin that he was “incredibly sad”.

“… I can’t believe it. I’m distraught. It’s the worst news an Argentina fan could receive. We loved him. I’m trying to talk to his family. We’ll see. There is so much sadness,” Fernandez said.

Earlier in November, Maradona had successful surgery for a blood clot in his brain and was discharged from the hospital, eight days after the medical operation.

The autopsy of Diego Maradona found the legendary football player’s cause of death to be heart failure.

According to local media on Thursday, a preliminary autopsy report showed that the former football player succumbed to acute pulmonary edema due to chronic heart failure while he was sleeping.

The final result of the autopsy will reportedly be announced after toxicological and histopathological tests that will look for the presence of any substance in Maradona’s body. 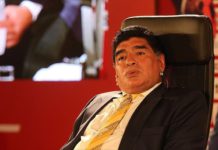 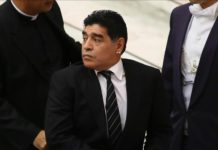 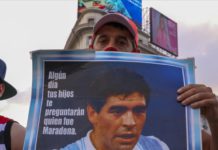 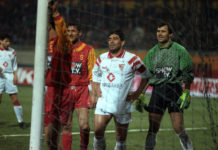