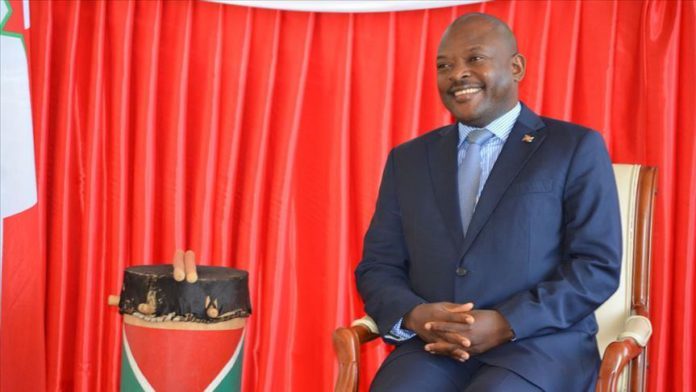 Nkurunziza became the president of the small, landlocked East African country in 2005.

He was re-elected in 2010 and in 2015 when he won a controversial third term despite opposition protests and international condemnation.

Nkurunziza’s candidacy had been condemned as unconstitutional by the opposition, sparking months of protests and an attempted coup in May of that year.

His victory also triggered donor sanctions against the country.

But the government dismissed international criticism, including by the US, EU and former colonial power Belgium, which described the election as not credible.

Born in Bujumbura, the largest city in Burundi, Nkurunziza was a former teacher and former leader of a Hutu rebel group. He was a born-again Christian and football fanatic.

In a surprise move in June 2018, Nkurunziza announced that he would not run in the 2020 elections, despite a referendum that could allow him to rule until 2034.

But analysts say Nkurunziza has left a divided nation.

Nkurunziza grew up in the northern province of Ngozi to a Tutsi mother and Hutu father.

His father served as governor of two provinces before he was murdered in 1972 during ethnic violence that resulted in the killing of more than 100,000 people of the Hutu ethnic group and more than 10,000 Tutsis.

Nkurunziza studied at the University of Burundi in Bujumbura in 1990, where he graduated with a degree in physical education. He served as a high school teacher and assistant lecturer at the university.

When a civil war broke out in 1993 between Hutu rebel groups and the Tutsi-dominated army, Nkurunziza escaped death during a 1995 army attack on the university campus that left some 200 people dead.

He then became actively involved in the rebellion, joining the Forces for the FDD, an armed wing of Hutu exile group, the CNDD.

In 1998, he was sentenced to death in absentia by a Burundian court over his rebel activities.

In late 1990s and early 2000s, the CNDD-FDD split into several factions, and Nkurunziza assumed leadership of one faction in 2001.

Using his new capacity, Nkurunziza headed negotiations that culminated in his faction of the CNDD-FDD signing a peace deal with then-President Domitien Ndayizeye in 2003.

Under the agreement, Nkurunziza got immunity from prosecution for war crimes.

He later joined Ndayizeye’s Cabinet as minister of good governance in November 2004.

In 2005, the CNDD-FDD became an official political party, going on to win parliamentary elections held in July that year.

This paved the way for Nkurunziza to stand for president on the CNDD-FDD ticket.

He resigned as party chairman and went on to win the presidential vote by members of the parliament by 151 of the 162 ballots cast on Aug. 19, 2005.

He formally took the oath of office on Aug. 25.

But Nkurunziza faced the daunting task of maintaining peace and stability in the country.

His third term was dogged by unrest and violence, particularly blamed on the authorities and the Imbonerakure — the youth wing of the CNDD-FDD.

In March 2018, Nkurunziza was granted the title of “eternal supreme guide” by the CNDD-FDD.

In January this year, Burundi’s parliament voted to pay $530,000 to Nkurunziza and provide him with a luxury villa when he left office. Nkurunziza was due to be replaced on Aug. 20 when a new president will be inaugurated.

Besides awarding him a lifetime salary, the legislation also called for elevating Nkurunziza to the title of “supreme leader” upon leaving office.

Nkurunziza died following heart failure on June 8, 2020 at a hospital in the eastern city of Karuzi, according to a government statement.

But there is speculation he might have died from coronavirus-related complications, especially after his wife Denise Bucumi Nkurunziza was admitted at the Aga Khan University Hospital in the Kenyan capital Nairobi late May for specialized treatment after apparently being diagnosed with the virus.

Health experts have warned that Burundi remains the only country in Africa which has not enacted any policy to curb the spread of COVID-19 — based on the claim “God is protecting the country”.

Official reports indicate Burundi has so far recorded 83 cases and one death.