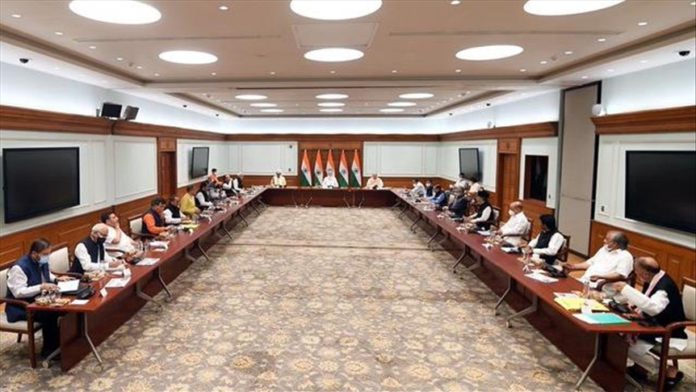 By participating in Indian Prime Minister Narendra Modi-led meeting in New Delhi on Thursday, pro-India politicians in Jammu and Kashmir have “normalized” the abrogation of the region’s decades-old autonomous status carried out by the Indian government on Aug. 5, 2019, a cross-section of Kashmiri society said.

All major pro-India Kashmiri Muslim politicians, including three former chief ministers, were either jailed under preventive laws or detained in their homes when the Modi-led government scrapped Article 370 and Article 35A of the Indian Constitution.

These legislations allowed Kashmir to have its own constitution that could make laws and barred outsiders from buying properties or applying for government jobs. The state was also downgraded and divided into two federally ruled territories of Ladakh and Jammu and Kashmir.

Kashmir, a Muslim-majority Himalayan region, is held by India and Pakistan in parts and claimed by both in full. A small sliver of Kashmir is also held by China. Some Kashmiri groups in Jammu and Kashmir have been fighting against Indian rule for independence or for unification with neighboring Pakistan.

Pro-India Muslim politicians had never been amenable to the idea of secession but they had always called for maintaining the autonomous status of the region. In fact, ahead of the Aug. 5 changes, they had warned India that if Article 370 and 35A were scrapped, the very foundations of the relation between the Indian Union and the region would come under question.

Earlier in the day, top pro-India politicians from the disputed Indian-administered Jammu and Kashmir met with Indian premier for the first time since New Delhi stripped the region’s autonomy.

Ghulam Ahmad Mir, head of the Congress party in Jammu and Kashmir who also attended the meeting, told Anadolu Agency that the meeting was held in a cordial manner, and the prime minister heard the leaders “very patiently.”

Altaf Bukhari, who heads the regional Jammu and Kashmir Apni Party, said: “The prime minister said he is committed to the restoration of statehood.”

In a Twitter post, Modi said the meeting “is an important step in the ongoing efforts towards a developed and progressive J&K (Jammu and Kashmir).”

Since Aug. 5, 2019, however, the pro-India politicians stepped down from their maximalist positions, although they continue to demand the restoration of autonomy.

Showkat Rasool, a confectionary businessman in old Srinagar, told Anadolu Agency: “Kashmiri politicians are walking India’s talk. Wittingly or unwittingly, they are following the Indian script. Our fate has been reduced to whether Indian government will hold elections or restore statehood.”

“The same politicians who said Kashmir’s relations with India would end if Article 370 is tampered with are slowly trying to normalize the treacherous decision of the Indian parliament,” he added.

Najeeb Mubarki, a journalist and a political commentator, said the meeting essentially meant nothing because the Indian government talked to a set of people who have “no authentic representative character.”

Sheikh Showkat Hussain, a former professor of law and a political commentator, told Anadolu Agency that “Modi needed a photo op for international audience and pro-India Kashmiri politicians provided him that.”

“Had today’s talks been preceded by some measures like release of pro-freedom leadership or cessation of ongoing repressive measures, pro-India Kashmiri politicians would have something to build on. But they appeared eager to rush to New Delhi without anything substantial,” he said.

“This has been our story since 1947. We have been betrayed by Indians and the people we call our own,” he said.