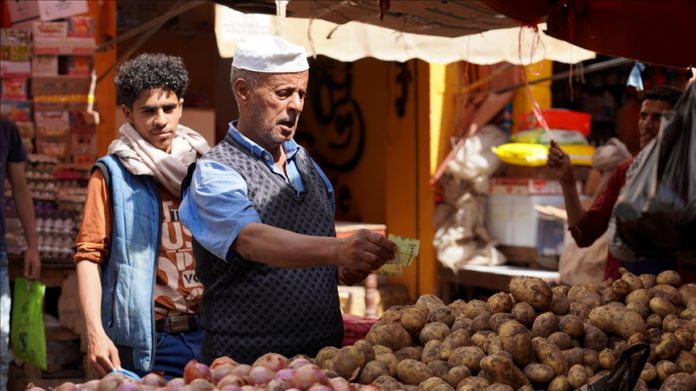 The Muslim festival of Eid al-Adha (Feast of Sacrifice) is no longer a source of joy in war-torn Yemen. Rather, it has become a reminder of the deteriorating economic conditions in the Arab country.

Since 2014, Yemen has been beset by civil war, in which more than 233,000 people were killed and 80 percent of the country’s 30 million population became dependent on aid to survive, in the world’s worst humanitarian crisis, according to the UN.

The festival comes this year amid price hikes, interruption of salaries, and devaluation of the local currency, causing the absence of Eid manifestations of slaughtering sacrificial animals and buying new clothes.

Meat, sweets, cakes and nuts are absent from the tables of most Yemenis on Eid al-Adha, while livestock markets witnessed an unprecedented stagnation due to the price hikes, according to traders and consumers.

Attia attributed the high prices of sacrificial animals to importing most of them from outside the country.

“The prices of local livestock brought from coastal cities have also increased, because of the high costs of transportation to Taiz via pumpy mountain roads, the high prices of oil derivatives, and the blockade imposed on the city since 2015.”

Ali al-Watiri, an employee from Taiz, went to the livestock market to buy an animal for Eid, but returned home empty-handed due to the high prices.

“Like thousands of Yemenis now, I will have to buy a fresh chicken on the first day of Eid and consider it as a sacrifice,” al-Wateri said.

Eid al-Adha marks a sacred occasion when the Prophet Ibrahim was willing to sacrifice his son, Ismail in the sake of Allah.

The situation is not much different in the southern city of Aden. The celebratory mood of Eid al-Adha is absent from most Yemeni homes due to the state of desolation and darkness on the streets.

“Hundreds of thousands of Yemenis are unable to buy Eid clothes for their children due to the collapse of the local currency and the government’s inability to pay employees’ salaries,” Yemeni lawyer Safaa al-Daba’I told Anadolu Agency.

“Markets are full of clothes, including cheap ones, but most people are unable to buy them,” she said.

Ayman Fadl, the owner of a clothing store, explained that most merchants buy clothes in foreign currency, therefore they are forced to raise the prices due to the deterioration of the value of the local currency in Yemen.

According to the UN Office of Coordination of Humanitarian Affairs (OCHA) in Yemen, prices have increased across the country by 200 percent this year, compared to the situation in 2015.

Samah Badebian, a professor at the University of Aden, said Eid al-Adha has become a source of pain and sadness instead of joy due to the inability of parents to meet the demands of their children.

“Many families have been exhausted by the outrageous high prices, and other families have lost their breadwinners on the frontlines,” Badebian told Anadolu Agency.

She, however, added that “the spirituality of the religious occasion of Eid al-Adha added a sort of calm breeze to the people’s tired souls.”

Haneen al-Tayeb, a presenter on the Yemeni Belqees satellite TV channel, said many residents in Aden are unable to even go to the beaches or public parks due to the high cost of car fuel, as the price of one liter reached 600 riyals ($6).

In the Mansoura district of Aden, where the only livestock market is located, sheep are overcrowded due to the very weak demand, as one livestock costs $200, while the salary of a government employee in Aden ranges between $60 and $70.

Adnan al-Jaafari, a livestock dealer, said traders and consumers are suffering from the high prices as a result of the government’s failure to alleviate the suffering of the people.

The complexities of the Yemeni conflict are compounded by regional spillovers. Since March 2015, the Saudi-led coalition has carried out a massive air campaign in support of the government forces against the Iranian-backed Houthis, who control much of the country, including the capital, Sanaa.

*Mohammed Al-Ragawi contributed to this reprot from Istanbul