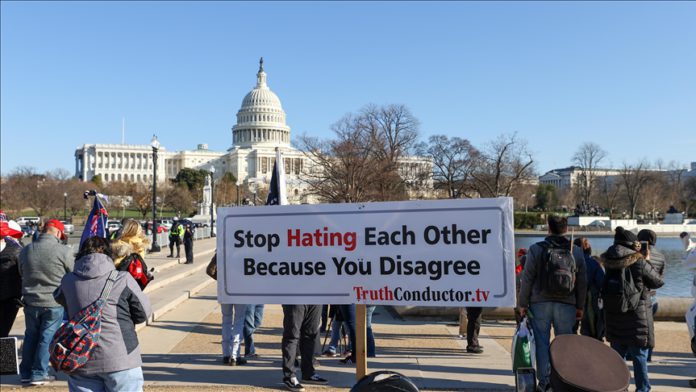 The prestige of American democracy in the world has been shaken and the fragility of the society will continue as aftershocks following the assault on the US Congress by a group of supporters of President Donald Trump, according to Turkish academicians.

Yelda Ongun, a professor who heads the department of Political Science and International Relations at Baskent University in the capital Ankara, told Anadolu Agency that such an incident occurred for the first time in modern US history, adding that although the first article of the US Constitution guarantees freedom of expression, US President Donald Trump’s Twitter, Instagram and Facebook accounts have been blocked.

On Wednesday, supporters of Trump protesting Congress’ certification of Joe Biden’s presidential win clashed with police, eventually breaching the Capitol building and making their way to the Senate floor.

Ongun underlined that there is concern that the protests will continue in other states as well and Trump would like to carry these events of domestic politics to the foreign policy level.

She noted that it raises a question mark over why the US — “which is aware of the coups in the farthest corners of the world” — did not prevent the Jan. 6 rally that Trump announced on Twitter and called on his supporters to attend.

“Wasn’t it thought that things would get this big, or did the Democrats deliberately give way to it?” she said.

“As a result, the US, which claims to be the exporter of democracy to the world, is going through days when it is struggling for democracy.”

Mesut Hakki Casin, a law professor at Yeditepe University in Istanbul, pointed out that this Wednesday was the “longest night” in US political history.

“American political life has been seriously split, so we see that the political polarization within the country is as deep as it was during the American Civil War,” he said.

Casin underlined that the invasion of Congress shocked both the American people and the world, adding that “American political and democratic life has taken a historical strike.”

Emphasizing that the developments have deepened the polarization with Black and white racism, Casin said the aftershocks of the fragility will continue in the country.

He said the “cloud of legitimacy” over the electoral system cannot be easily removed in the US.

“The prestige of American democracy in the world has been shaken.”

Referring to the fact that the police in the US did not take the necessary precautions, Casin said there were different opinions regarding the latest developments and that the events could be evaluated as “attempts and intervention to the coup.”

He went on to say that Trump in the next stage will face judicial litigation not to be elected president again.

Noting that he believes that the US will restore the rule of law and democracy, he said: “However, this trauma will cause the global leadership of the US to be questioned.”

Burak Kuntay, head of the American Studies Center at Bahcesehir University, said the announcement of the election results in the US, which were usually revealed in an hour under normal conditions, have taken months to be announced for the first time.

He pointed out that this delay was due to Trump’s refusal to accept defeat, adding that Trump’s continuation of his rhetoric that the elections were rigged and his refusal to accept the results were a factor that triggered the senators and the people on the street and encouraged them to revolt.

Kuntay highlighted that Trump made a mandatory statement after the Virginia governor’s statement on deploying the US National Guard to the street.

“I believe the events will end with the involvement of the National Guard. I think that serious security measures will be taken to prevent major incidents, especially before the oath ceremony,” he said.

He also stressed that many judicial remedies could be opened against Trump, including intervention in the US Constitution and incitement to riot.

Kuntay said the incidents would end with Biden taking over the post.

“Individual events can occur only in certain states after the inauguration. I do not expect any serious incident of this size [as now]. I do not think the statements that the ‘Trumpism’ trend will continue in the US are correct.”

At least four people died after violent protesters stormed into the Capitol building, including one woman shot by Capitol police. Democratic and Republican lawmakers have unanimously condemned the assault on the Capitol by the people and called the riots a “coup,” “a despicable act of terrorism” and “a national embarrassment” in separate statements.