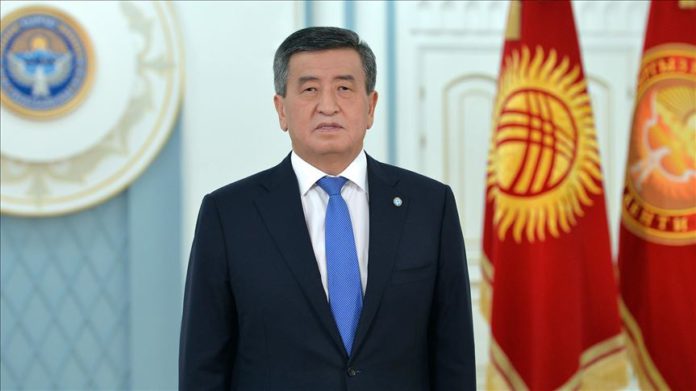 The Kyrgyz president on Tuesday called on all political parties to obey the rule of law and place the fate of the country above political ambitions.

In a written statement, President Sooronbay Jeenbekov said the peace and security of Kyrgyzstan and its people are the most important matters.

Stressing that he has ordered the Central Election Commission to thoroughly investigate the violations and to annul the election results if necessary, Jeenbekov urged the leaders of all political parties to calm down their supporters.

He noted these political forces disrupted public order under the pretext of elections, disturbed the “peaceful life of the locals” and disobeyed police, beat up medics and destroyed buildings.

Saying he has ordered the security forces not to open fire and not to endanger the lives of citizens, Jeenbekov added: “So far, we have taken all possible measures to avoid the aggravation of the situation. The peace and the stability of the country and people are above any parliamentary mandate.”

According to the preliminary results, voter turnout was around 55% and four political parties out of 16 passed the 7% threshold to enter parliament: the Birimdik (Unity) Party, Mekenim Kyrgyzstan (Homeland Kyrgyzstan) Party, Kyrgyzstan Party and Butun (All) Kyrgyzstan Party.

Supporters of 12 political parties that reportedly failed to exceed the 7% threshold set by the Central Election Commission for entry into parliament staged a protest in Ala-Too Square in the capital, demanding that the election results be canceled.

Demonstrators drove trucks toward the police, who retreated, and occupied the presidential palace and interior of the parliament building.