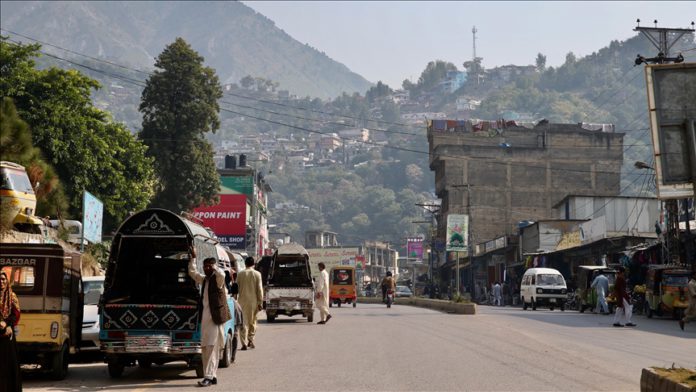 The president of Pakistan-administered Kashmir deplores the role of the international community, mainly the UN, in the long-standing Kashmir dispute, calling it “conspicuously disappointing.”

“The UN role in Kashmir has been conspicuously disappointing because practically it has taken a hands-off approach, though they realize Kashmir is the elephant in the room,” Masood Khan said in an exclusive interview with Anadolu Agency on the occasion of Kashmir’s national day, which is being commemorated on Tuesday across the Line of Control (LoC) that divides the region.

People across the dividing line are observing the 90th anniversary of the killings of dozens of Kashmiris in the city of Srinagar on July 13, 1931, when they were protesting against the Hindu Maharaja Hari Singh, then ruler of Jammu and Kashmir.

Commonly known as “Martyrs Day”, the event is seen as the starting point of the current phase of Kashmiris’ longstanding freedom struggle.

“The US wants the status quo, an option preferred by India, and the European Union is hamstrung. But the citizens of the world can be mobilized. Today, for the Kashmir cause, the streets are more promising than official chambers – bilateral or multilateral,” he said.

By ignoring the Kashmir issue, Khan added, powerful nations which claim to be the custodians of international law are “underwriting impunity for crimes against humanity” in Jammu and Kashmir.

Muslim-majority Kashmir has been the main ingredient in the long-simmering rivalry between Pakistan and India since the two nuclear-armed neighbors gained independence from the British Empire in 1947.

The picturesque Himalayan valley is held by the two countries in parts and claimed by both in full. Since 1947, the two neighbors have fought three wars, two of them over Kashmir.

Already heightened tensions between the two countries touched a further low after India stripped the longstanding semi-autonomous status of the valley in August 2019, prompting Islamabad to downgrade diplomatic relations with New Delhi and suspend bilateral trade.

Khan, a veteran diplomat who served as Pakistan’s permanent representative to the UN from 2012 to 2015, contended that New Delhi is looking for a “cosmetic engagement” with Islamabad for “good optics” following the scrapping of the valley’s decades-long special status.

India “wants to give a false impression that Pakistan is ready to live with the changes India has made since Aug. 5, 2019. But Pakistan has not. Pakistan has made it clear that it would not hold any bilateral talks until it reverses its actions of August 2019.”

Replying to a question about the resumption of long-stalled peace talks India and Pakistan, Khan said bilateral talks in the past on Kashmir have never produced results because India’s sole purpose is to “bury the issue for all times to come.”

“That’s not acceptable to Kashmiris. I see little utility of such talks if the Kashmiris, whose fate is at stake, are not sitting at the negotiating table. The official international community has no desire for playing a role to resolve the issue,” he added.

Referring to the reaction of the international community to India’s actions in August 2019, Khan said: “In the immediate aftermath of New Delhi’s move, influential parliaments and international media called out India and castigated it for its illegal actions.”

“India was held accountable. The UNSC [UN Security Council] also met informally to discuss the perilous situation in the region, and there was a groundswell of support for the besieged Kashmiris. But the momentum frittered away after three months,” he said.

“Now the unfolding tragedy in Kashmir is buried under the heavy burden of the global geostrategic agenda.”

The controversial move, he said, could not even get support from pro-India politicians in Kashmir, and has further bolstered the “legitimacy and appeal” of pro-freedom leaders.

“Even before August 2019, pro-India politicians had completely lost their credibility. The bulk of the captive Kashmiri population saw them as henchmen of Delhi and in fact facilitators of the reign of terror in Kashmir,” he said.

After August 2019, he argued, these leaders were “disparagingly dumped by their masters.”

“India looked for their substitutes but had limited success. These pro-Indian leaders bent over backwards, their blackmailing caveats notwithstanding, to stage a comeback,” he said.

“The Modi government wants to co-opt them for getting their support for illegal demographic changes in the state and delimitation of the constituencies to give more representation to the Hindus in a future legislative assembly.”

On the other hand, he added, the “legitimacy and appeal” of the Hurriyat Conference leaders – Syed Ali Geelani, Yasin Malik, Mirwaiz Umer Farooq, Asiya Andrabi and Shabir Shah – remains “as strong as ever.”

Khan said Kashmiris should be seated at every table that discusses the issue, and should be part of any political or diplomatic process that is initiated on Kashmir.

“Kashmiris should not be pushed to the sidelines as spectators when their fate is being decided. We know they want to join Pakistan. But until they do so, through a referendum, their voice is sovereign,” he said.

Referring to the Ladakh standoff between China and India, Khan observed that the development has made a difference.

India’s “Lebensraum,” he added, has been stopped in its tracks and Kashmir has gained more visibility and prominence worldwide.

“It has, ironically, also accentuated the issue’s complexity and intractability, which suits India. Kashmiris want a solution, not a perennial status quo and the vicious cycle of violence to which they are subjected every day,” he contended.

Diabetes forecast to affect 700 million by 2045