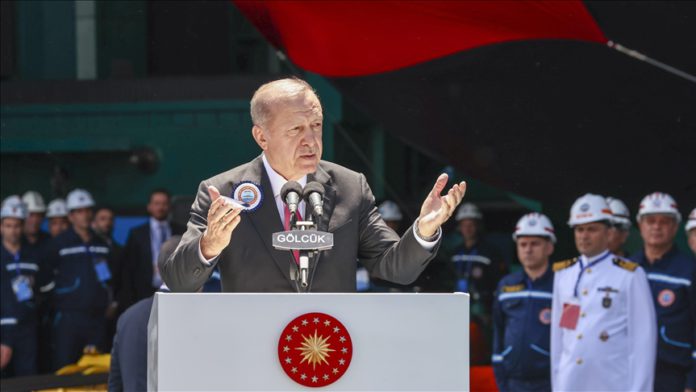 Turkiye will put into service six of its new submarines until 2027, the country’s president said on Monday.

Speaking at a ceremony held for the docking of Hizirreis submarine at Golcuk Naval Shipyard Command in the northwestern Kocaeli province, Recep Tayyip Erdogan said: “We are planning to put the Hizirreis submarine … into service in 2023 and Selmanreis in 2027.”

“Starting from this year, we will put one of our submarines into service every year and add six new type submarines to our navy until 2027,” Erdogan added.

Erdogan said that as part of the country’s New Type Submarine Project, they aim to deliver the first submarine, named Pirireis, to the Naval Forces Command this year.

He said that nearly 30 Turkish firms are taking part in the project.

Also speaking about Finland and Sweden’s NATO membership bids, Erdogan stressed that Turkiye wants to see concrete steps rather than diplomatic statements about its security.

Sweden and Finland formally applied to join NATO on May 18 – a decision spurred by Russia’s ongoing war on Ukraine, which began in February.

However, Turkiye, a longstanding member of the alliance, has voiced objections to the membership bids, criticizing the countries for tolerating and even supporting terrorist groups.

Turkiye’s security concerns should not be addressed by open-ended diplomatic statements, he said, adding that Ankara believes that NATO’s enlargement policy without prioritizing basic security concerns is not good for either Turkiye or NATO itself.