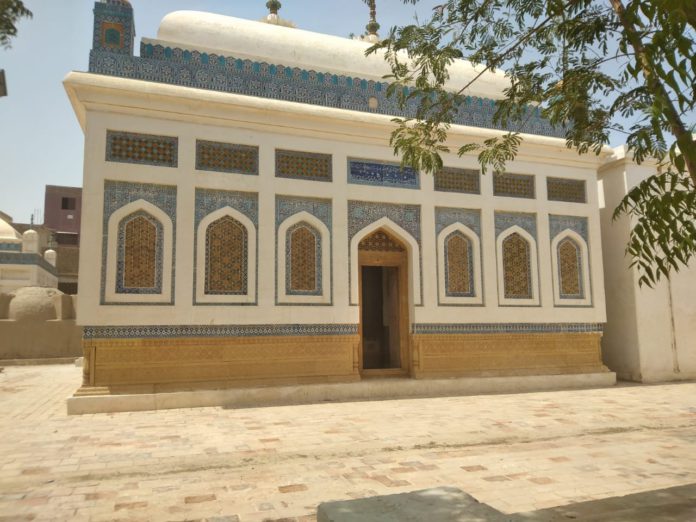 In the middle of a sprawling courtyard stands an imposing structure, attracting architecture lovers with its fresh look.

Its newly-restored blue tiled exterior gives a soothing look to the visitors under the midday broiling sun.

The centuries-old building is the mausoleum of Mian Ghulam Shah Kalhoro, an 18th century ruler of the Kalhoro dynasty, and the founder of modern Hyderabad, the second-largest city of the southern Sindh province in Pakistan.

Shah was considered one of the most capable rulers of the dynasty, and ruled from 1757 to 1772. The tomb was constructed by his son and successor, Sarfraz Khan Kalhoro in 1772.

Standing upon a raised platform in the center of a fort, the now-impressive building was almost in ruins until a few years ago. But a group of architecture lovers recently restored this spectacular structure, a mix of Mughal and Kalhoro architectural style.

“When we began to restore this structure in 2015, it was in a sorry state. Its roof had developed cracks, floor was damaged, and walls were crumbling,” said Ishtiaq Ansari, an official of the Endowment Fund Trust (EFT), which has carried out the preservation of the mausoleum and several other buildings across Sindh.

“We had to start from scratch. It took us over three years to restore the original structure, and another couple of years to finish the fresco work (plastering a wall or ceiling) inside the mausoleum.”

Established by the Sindh government in 2008, the non-profitable organization has been involved in protection and preservation of over 30 historical buildings in the province.

The tomb is constructed with chiroli, lime, jute and burned bricks, whereas the interior floor and graves’ surface are made with marble.

The tomb’s inner walls are decorated with Secco painting – verses from Quran, and poetry in Arabic and Persian.

Kashi tiles are used on the front and all outer walls of the building.

Adjacent to the mausoleum is “Tajjar,” or vaulted roof building, which houses the graves of other royal family members, mainly women.

This structure, which too was in a state of neglect, has also been restored by the EFT.

“We have used the same [kind of] material, including tiles, bricks, and stones, which were used at the time of its construction,” Ansari, who is a civil engineer, told Anadolu Agency. “It was indeed a tough and tiring job to bring this structure back to its celestial past. Constructing a new building is many times easier than preserving and restoring an old structure in its original shape.”

In the center of the city’s densely-populated Hirabad area are located some historical buildings, including the tombs of Talpurs, another royal dynasty, which ruled Sindh from 1783 to 1843.

Commonly known as “Miran ja Kubba” or tombs of Mirs (Talpurs), these structures are divided into northern and southern complexes.

The complex’s main building is the tomb of Mir Karam Ali Talpur, the founder of the Talpur dynasty. On the left side is an ordinary graveyard, which has been separated from the tombs’ premises by a wall.

“The tombs did survive but badly deteriorated by the ravages of time and neglect,” Ansari said.

Long-run moisture had damaged the tombs’ structures and the wall paintings. One of the tombs had lost its dome due to heavy rains in 2012.

Another factor that added to the damage was the “unprofessional” repair of Kalhoro and Talpur tombs in the recent past, using cement instead of the original material to fill the holes in the structures.

The cement, according to Ansari, chocked voids in the walls and the roofs, causing cracks in the structures.

“It took us five years (2010-2015) to restore eight of the 12 tombs, using same material and techniques to make them physically and visually compatible with the original shape of these magnificent structures,” Ansari said. 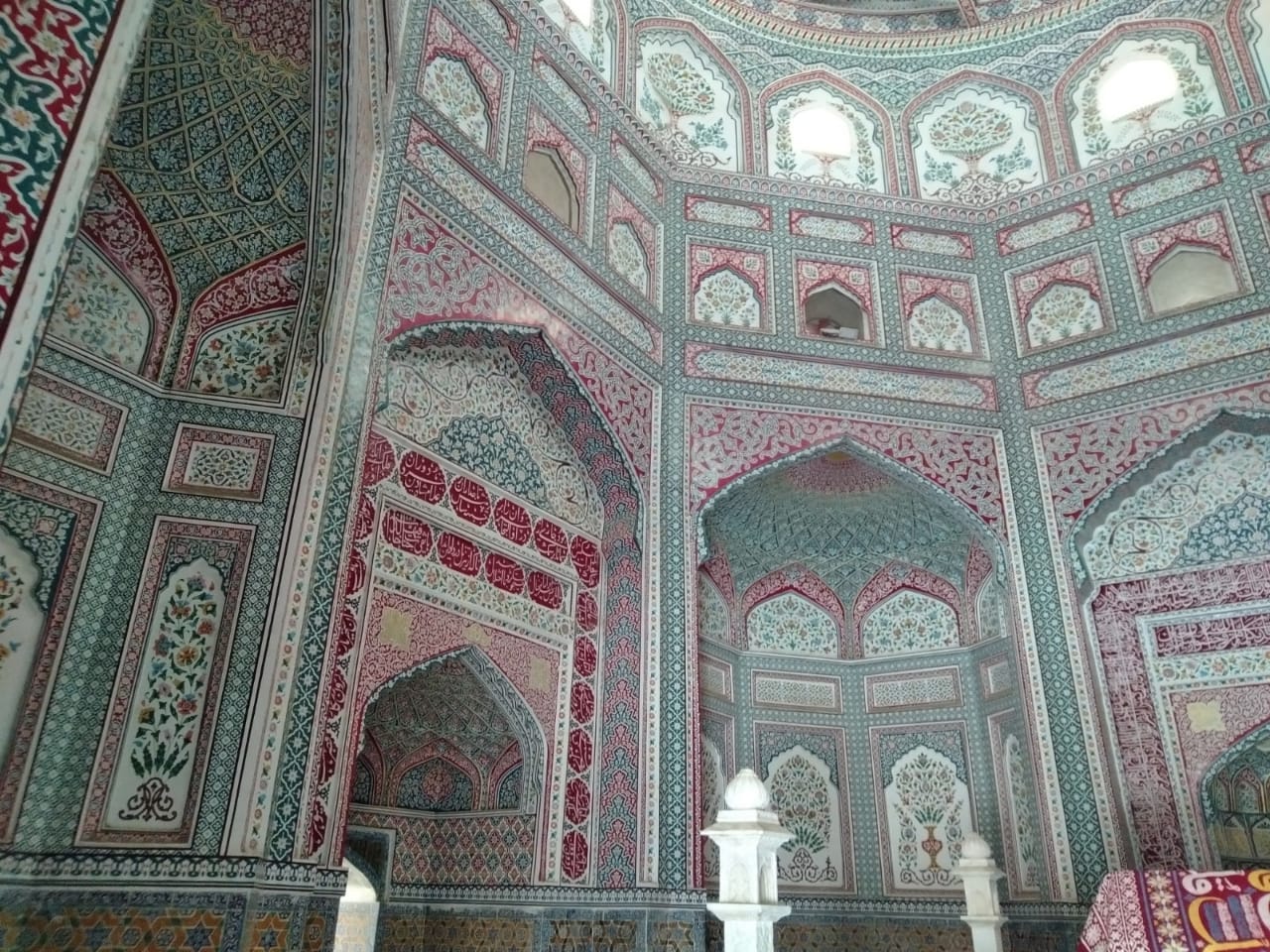 Besant Hall and its Freemason past

Located opposite to the Radio Pakistan building in the bustling downtown, Besant Hall had long been a hub of social and cultural activities in Hyderabad.

Built in 1901, and named after Annie Besant, a 19th century British theosophist and human rights activist, the building was another victim of the harsh environment and longtime neglect.

“This building was handed over to us [for restoration] in a very bad shape. Its floor was uneven, walls were cracked, roof and arches damaged,” said Akbar Ali, who is overseeing the restoration of the red-bricked building that began in 2019.

Almost 95% restoration work has been completed, according to Ali, as masons were bricking the last remaining portion of the building.

Comprising a long rectangular hall, a library, and a reading room on the first floor, the Victorian style building was also used for community purposes, mainly weddings.

There are two rooms at the building’s backside known as “brides’ rooms” as lodging was also provided to the newly-wed couples. On the right side of the rooms are two servant quarters.

However, the 120-year old heritage site will no longer be used for community purposes, including weddings after its restoration.

“After restoration, it will serve only for cultural, social, and intellectual activities, which it was actually meant for,” Ali told Anadolu Agency.

Baked bricks with lime jute mortar have been used in the construction of the main building, while the walls of the hall are plastered with lime jute and hill sand.

The floor of the main entrance is made with special brick pavers in a hexagonal shape.

A huge “eye” logo carved in the middle of the main hall suggests that the building had had some kind of connection with the Freemason Society.

The society, with its own symbols and rites, dates back to the early 18th century. Its members reportedly included some of the most important men in history, including George Washington, the first US president, Benjamin Franklin, America’s founding father, Mark Twain, a renowned novelist, and Winston Churchill, a former British prime minister.

Historians, however, do not have any evidence to support this contention.

“Besant Hall served as a lodge (sub-branch) of the Theosophical Society, which is totally different in nature from the Freemason Society,” Zaffar Junejo, who teaches history at the NED University of Engineering and Technology Karachi, told Anadolu Agency.

He, nonetheless, reckoned that the carving of the Freemasons’ logo at Besant Hall might be a “symbol of solidarity” by the Theosophical Society with the fellow “new religious movement.”

Besant Hall is still owned by the Theosophical Society Pakistan.

The Freemasons’ logos, Junejo added, could be found at several other colonial buildings across Pakistan. “But it does not mean these buildings had any connection with the Freemasons. A degree of contact between the new religious movements during that era was common,” he argued. 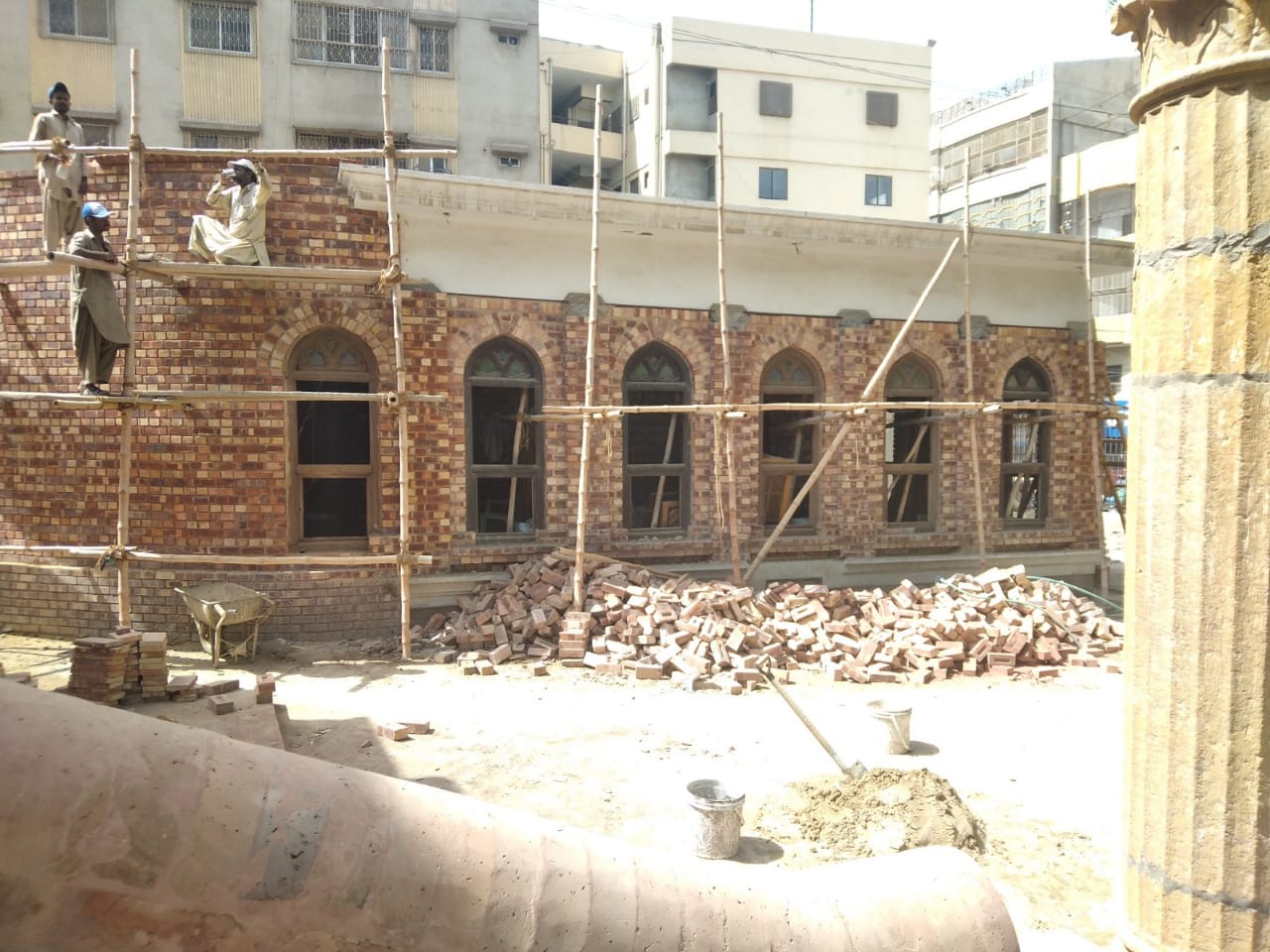