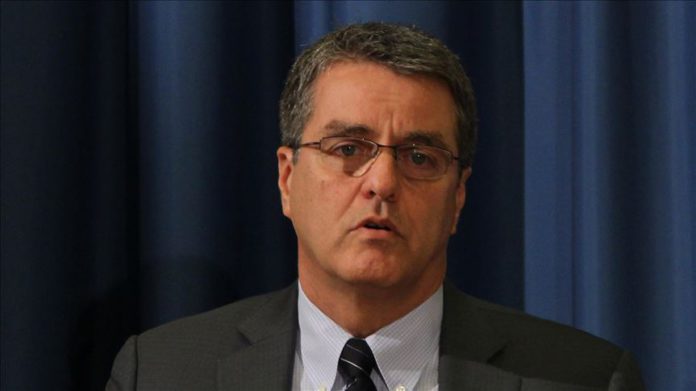 Nobody knows how long the COVID-19 crisis will continue, but humanity will have to face similar challenges and must use this time to prepare for them, said the outgoing head of the World Trade Organization on Thursday in his farewell address.

WTO Director-General Roberto Azevedo spoke to journalists in Geneva after farewell remarks to the General Council, the organization’s highest decision-making body, during a time of plunging world trade, trade tensions, and problems with the dispute settlement body.

“There are big variables” in addressing the pandemic, he said.

He added: “We don’t know how far away from a vaccine we are and an effective one. All those things are extremely important.”

He said similar crises will follow the pandemic, so the world must use this time to get ready.

“And it’s not for the WTO only; it is for international organizations and the international community as a whole; how do we prepare for the next one? We need to have mechanisms in place that will kick in automatically,” said Azevedo.

Changing of the guard amid turmoil

On May 14, Azevedo announced he would cut his second term in office short by a year, leaving on Aug. 31 during a troubled time for the WTO.

In early April, the WTO forecast up to a 32% fall in the global trade this year as the COVID-19 pandemic disrupts regular economic activity.

His departure comes during a period of attack on the organization by US President Donald Trump, and the process to select his successor is now in full swing.

The US administration effectively hobbled the appellate body of the WTO’s Dispute Settlement Body by not allowing the nomination of new judges to take place.

Also, Washington accuses China of not implementing market reforms that members should undertake.

On June 22, Azevedo said, “The fall in trade we are now seeing is historically large – in fact, it would be the steepest on record.”

This week WTO members moved into the second stage of selecting a new head following public presentations by the eight candidates for the post.

“The WTO now is in transition mode,” Azevedo said. “The WTO is truly privileged to have as candidates people of such high caliber.”

Three of the candidates are from Africa – Egypt, Kenya, and Nigeria – one from Mexico, another from Moldova, plus a Saudi Arabian, a South Korean, and one from the UK. The Kenyan, Nigerian, and South Korean candidates are women. No woman or African has ever headed the WTO.