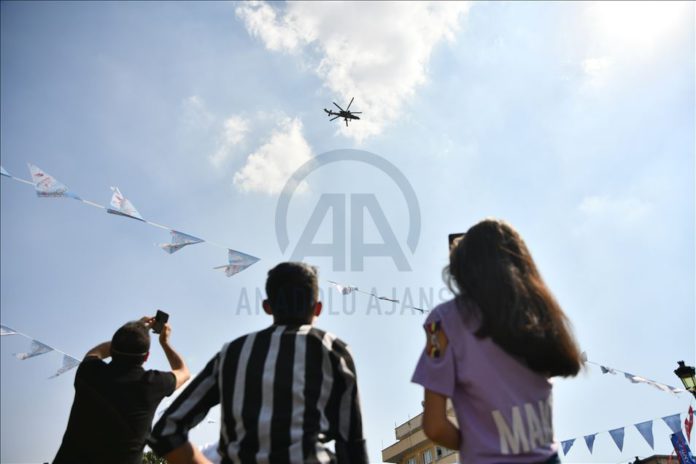 The four-day event will host fewer visitors and be broadcasted live through social media platforms due to the pandemic.

The festival includes a host of activities such as air shows with warplanes and helicopters, seminars and summits, as well as competitions and fairs.

GAZIANTEP, TURKEY – SEPTEMBER 24: People watch the performing of SOLOTURK, the aerobatic demonstration team of the Turkish Air Force, during the opening of the Space and Technology Festival (TEKNOFEST) in Gaziantep, Turkey on September 24, 2020. ( Kerem Kocalar – Anadolu Agency )

As an incentive for competitions, Teknofest will grant awards worth over 3 million Turkish liras (around $390,000).

Turkish Technology and Industry Minister Mustafa Varank said the event has been organized in Istanbul for the last two years.

Last year, it was decided that the event will be held in various Turkish provinces in even years and in the metropolitan city of Istanbul in odd years, the minister said during the event’s opening ceremony.

This year, over 100,000 young people applied for Teknofest competitions, he noted.

Recalling that the event was visited by over 1.7 million people last year in Istanbul, he stressed: “We wanted to break the visitors record this year, but the pandemic has not allowed.”

He said Turkey is working to develop critical technologies and produce competitive goods.

“Only in this way, we can gain our economic and technological independence,” the minister added.

“Turkey should develop and produce technology, [as just] using technology is not enough for becoming a fully independent, strong, and prosperous country,” he said, adding Teknofest is a platform for young people who will create the future.

Anadolu Agency has been the global communication partner of the event since 2018, including this year.

The annual event was scheduled for April, but was postponed due to the pandemic.

Turkey’s Teknofest getting better with every year