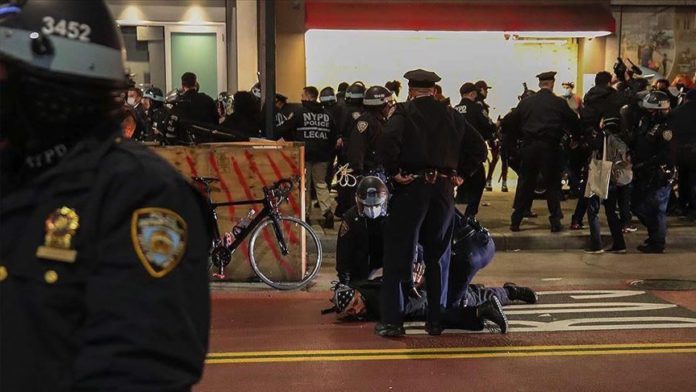 At least 11 demonstrators were arrested in Portland after authorities said protests turned to riots after windows of businesses in the downtown area were smashed.

The office also announced the deployment of the National Guard to respond and “maintain public order and ensure community safety.”

“Failure to adhere to this direction may subject you to arrest, citation and or/use of force including, but not limited to, impact munitions and/or tear gas,” it added.

About 50 arrests were made in New York City as protestors started fires and threw items at police.

“We support everyone’s right to self-expression, but setting fires puts others at risk and will not be tolerated,” police tweeted.

“Walking on the freeway is illegal and very dangerous for pedestrians and motorists,” authorities said. “We respect the right of everyone to express themselves under the First Amendment, but the freeway is not a place to do that.”

Police said four people were arrested in the nation’s capital during overnight protests. Businesses were boarded up Monday in fear of post-election unrest.

Several hundred Trump supporters gathered at the Maricopa County Recorder’s Office in Arizona, located outside Phoenix. They demanded that every vote in the key state counted.

As the vote counts in battleground states continue, Biden closes in on the 270 electoral votes needed to win, while the Trump campaign is mounting legal challenges in Pennsylvania, Michigan and Georgia, alleging irregularities and ”fraud.”