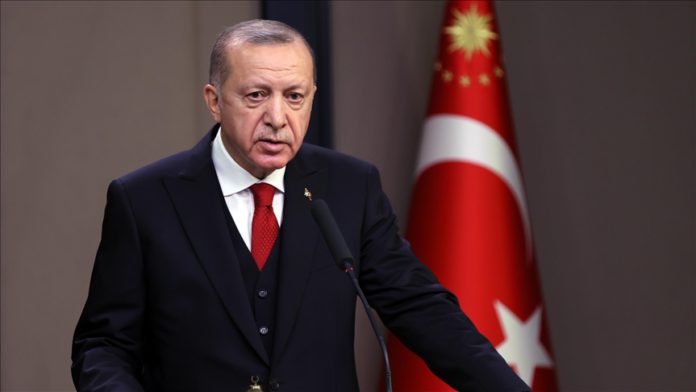 “Officially, since 1963, the EU has already been implementing sanctions on us constantly. The EU has never been honest and never stood behind its promises. But we’ve always been patient,” said Recep Tayyip Erdogan.

Speaking a day before an EU leaders’ summit starting Thursday, Erdogan said Turkey would wait and see the bloc’s decisions, adding that some leaders who are sincere and honest have already been upstanding in their disapproval of such attitudes towards Turkey.

Before leaving Ankara for a two-day official visit to Azerbaijan, Erdogan said Turkey would stand by Azerbaijan during its reconstruction on reclaimed lands formerly occupied by Armenia.

After 44 days of fighting between the two countries, last month the region of Nagorno-Karabakh was finally liberated, he said, underlining that Turkey would continue to support Azerbaijan.

On the disputes in the Mediterranean with Greece – which some EU countries are citing as reason to impose sanctions on Turkey – Erdogan decried Greece’s attitude, saying that it is Athens that refuses to negotiate to find a settlement.

Erdogan said they will protect the rights of Turkish Cypriots and their rights in the Eastern Mediterranean, ruling out any compromise on those.

“But if Greece acts honestly as our neighbor, we will continue to do our part at the negotiating table,” he said.

Erdogan said that he and US President-elect Joe Biden are no strangers, as they have been working together since the presidency of Barack Obama.

Erdogan lamented that international politics have taken an ugly direction in which anyone would bring up sanctions whenever they feel like it.

On US criticism of Turkish arms purchases — its procurement of Russian S-400 missile defense systems, an issue some US politicians are pressing for sanctions on – Erdogan said such remarks are unfitting.

Erdogan said he would speak with Biden once he officially takes office on Jan. 20.

In international relations, he said, ways can be found to get past conflicts by using diplomacy and negotiating to reach agreement on issues.