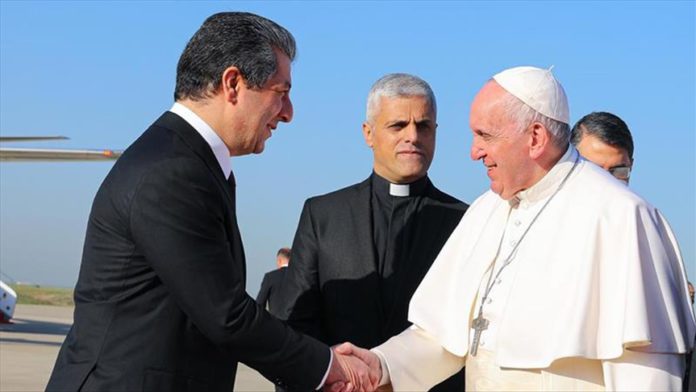 Pope Francis on Sunday visited Erbil, the capital of northern Iraq’s Kurdish region, as part of his current visit to the Arab country.

The pontiff was welcomed upon arrival by President of the Kurdish Regional Government (KRG) Nechirvan Barzani and Prime Minister Masrour Barzani, according to the state television.

“I’m honored to receive Pope Francis in Erbil,” Nechirvan Barzani wrote on Twitter following his meeting with the pontiff. “We reiterate our lasting commitment to peace, religious freedom and fraternity.”

After the meeting, the 84-year-old pontiff flew to Mosul to pray for the victims of war in the devastated northern Iraqi city that was once captured by the Daesh/ISIS terror group.

Francis is also scheduled to visit the Christian town of Bakhdida, also known as Qaraqosh, in the northern Nineveh province.

The Pope is set to return to Erbil on Sunday afternoon to hold a mass for nearly 10,000 attendees at the Franso Hariri Stadium.

Francis arrived in Baghdad on Friday where he separately met Iraqi Prime Minister Mustafa al-Kadhimi and President Barham Saleh as well as other government and religious Iraqi figures.