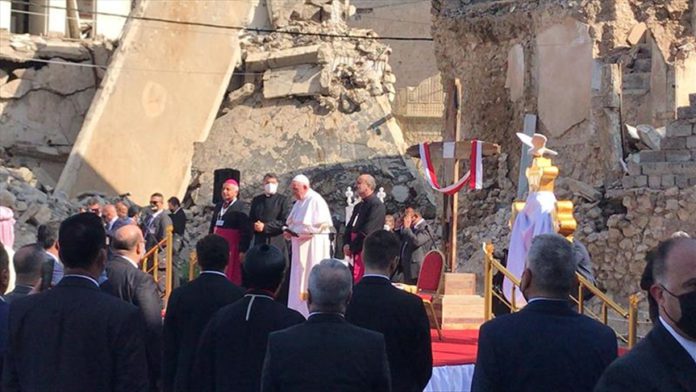 Pope Francis on Sunday led a prayer service for the victims of war in Iraq’s northern city of Mosul, once held by the Daesh/ISIS terror group.

“How cruel it is that this country, the cradle of civilization, should have been afflicted by so barbarous a blow, with ancient places of worship destroyed and many thousands of people — Muslims, Christians, Yazidis and others — forcibly displaced or killed,” Pope Francis told the crowd.

The pontiff called on the Christians of Mosul to return back to the city, where they were forced to flee by the Daesh/ISIS group, which was defeated and kicked out from the city in 2017.

At the end of his visit to the church’s square, Pope Francis released a white dove symbolizing peace — a regular and traditional theme for his papal visit.

Francis is scheduled to visit the Christian town of Bakhdida, also known as Qaraqosh, in the northern Nineveh province, before returning to Erbil on Sunday afternoon to hold a mass for nearly 10,000 attendees at the Franso Hariri Stadium.

Earlier Sunday, Francis visited Erbil, the capital of northern Iraq’s Kurdish region, where he met with the president and prime minister of the Kurdish Regional Government (KRG).

On Saturday, the pontiff held a historic meeting with Iraq’s top Shia cleric Ali Al-Sistani in the southern Najaf city.

Francis arrived in Baghdad on Friday where he separately met Iraqi Prime Minister Mustafa al-Kadhimi and President Barham Saleh as well as other government and religious Iraqi figures.