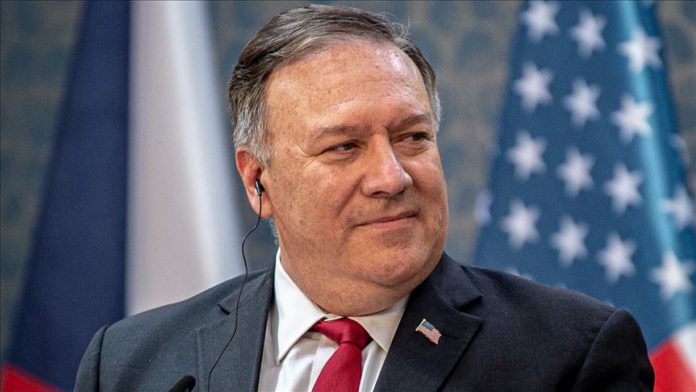 Abu Dhabi’s crown prince and the US’s top diplomat spoke by phone Tuesday about the recent controversial deal between the United Arab Emirates and Israel to normalize relations.

The two sides stressed the importance of developing strategic relations between the two countries in different areas, according to WAM.

Pompeo arrived in Israel on Monday to hold talks with Prime Minister Benjamin Netanyahu as part of a regional tour.

Israeli media reported Sunday that Pompeo will make his second official visit to the UAE.

However, Pompeo traveled from Israel to Sudan on Tuesday in the first direct flight between Tel Aviv and Khartoum.

Earlier this month, the UAE and Israel announced a US-brokered agreement to normalize relations, including opening embassies in each other’s countries.

Speaking at a joint press conference with Pompeo on Monday, Netanyahu said: “The agreement with the United Arab Emirates did not include any Israeli approval of any arms agreements.”

On Aug. 18, the Israeli premier renewed his government’s opposition to any sale of US F-35 fighter jets to the UAE.

He said that from the beginning, Israel has been against the sale of F-35 fighter jets and other advanced weapons to countries in the region, whatever they are, including Arab countries that make peace with the state of Israel.

The UAE reportedly canceled a trilateral meeting with Israel and the US scheduled for Friday after Netanyahu’s opposition to an F-35 agreement between the US and UAE.

Since 2011, the UAE has been seeking to acquire F-35 fighter jets, but the administration of former US President Barack Obama refused to arrange such a sale, while President Donald Trump’s administration agreed in 2017 to consider Abu Dhabi’s request to enter into initial talks on buying the planes.