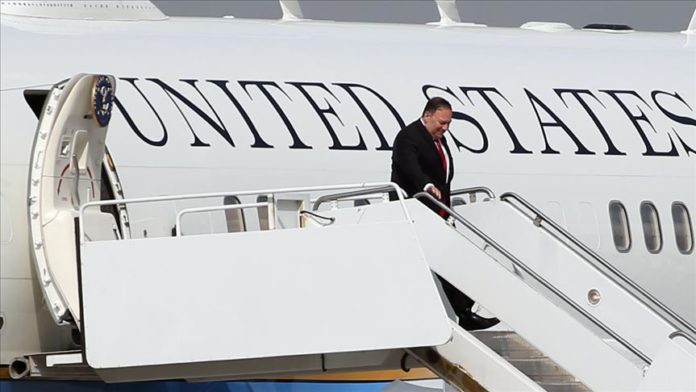 US Secretary of State Mike Pompeo will visit Greece, including an increasingly-watched naval base, to kick off a four-nation tour of Europe, the State Department announced Thursday.

Pompeo will depart the US on Sept. 27 and return over a week later on Oct. 5.

In Greece, Pompeo will meet with Prime Minister Kyriakos Mitsotakis and Foreign Minister Nikos Dendias “to renew our shared commitment to advance security, peace and prosperity in the Eastern Mediterranean and celebrate the strongest U.S.-Greek relationship in decades,” department spokeswoman Morgan Ortagus said in a statement.

Pompeo will also visit the city of Thessaloniki to sign a bilateral technology agreement and meet with commercial energy sector leaders “for a discussion to highlight energy diversification and infrastructure projects in Greece.”

He will then travel to Souda Bay on the island of Crete. There he will visit the US naval facility “to underscore the strong U.S. security partnership with NATO Ally Greece,” Ortagus said.

The visit comes on the heels of bombshell comments from US Senator Ron Johnson who suggested earlier this month that the US is building up the naval installation as a looming replacement for its presence at Incirlik Air Base in Turkey.

Johnson said during an interview with the Washington Examiner newspaper the US wants “to maintain our full presence and cooperation in Turkey” but said bilateral tensions are prompting officials to expedite a withdrawal.

“I don’t think we want to make that strategic shift, but I think, from a defensive posture, I think we have to look at the reality of the situation,” he said. “We’re already looking at Greece as an alternative.”

The Pentagon quickly pushed back on the comments when asked about the matter by Anadolu Agency. Spokesman Lt. Col. Thomas Campbell said the US “has no plans to end our presence at Incirlik Air Base.”

“The U.S. has operated at Incirlik Air Base for decades at the invitation of the Turkish government, and our continued presence there demonstrates the ongoing and strong relationship between the United States and our NATO Ally Turkey,” Campbell said in an email exchange.

Following his travels in Greece, Pompeo will visit Italian Prime Minister Giuseppe Conte and Foreign Minister Luigi Di Maio and address a symposium at the Vatican on religious freedom and meet with Catholic officials.

Pompeo will then head to Croatia on Oct. 2 to meet with officials to “discuss opportunities for closer cooperation between the United States and Croatia in key areas of mutual concern, including defense cooperation, the growing U.S.-Croatia investment relationship, and Croatia’s strong efforts to advance Western Balkan integration,” Ortagus said.