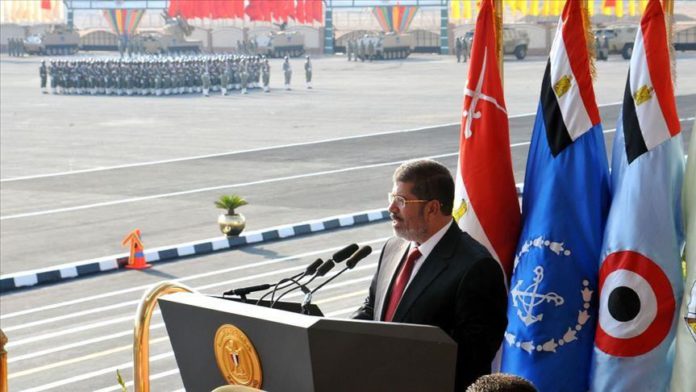 Even a year later when Mohamed Morsi, a product of Egypt’s brief experiment with democracy died, his friends and relatives say, there were still awaiting a credible investigation into his death and to fix those responsible for medical negligence.

The country’s first democratically elected president passed away in a Cairo courtroom on June 17, 2019, after deposed in a military coup in 2013. He was facing a host of legal charges, which many human rights groups and independent observers described were politically motivated.

Morsi, a leading member of Egypt’s Muslim Brotherhood had won Egypt’s first free presidential election in 2012. But just a year later, he was not only ousted but imprisoned after a bloody coup led by Abdel Fattah al-Sisi, Egypt’s then-defense minister and current president.

The former member of the Egyptian parliament Attia Adlan said Morsi’s trial was far from meeting the minimum standards of justice.

“He was the only president — in the contemporary history of Egypt — who gained real legitimacy as he was elected by Egyptians through free and transparent elections, and yet he remained in power for only one year,” said the former lawmaker.

“Morsi was always insisting on selecting the democratic path as the only source for achieving legitimacy. This was because he respected the people’s choice and their right to bring the one they prefer to power, he didn’t relinquish this principle until the last moments of his life,” recalled Adlan.

Egyptian poet and activist, Adel Abdul-Baki said Morsi wanted to make Egypt self-sufficient. “Morsi always wanted Egypt and Egyptians to achieve freedom from all the dependencies. All previous regimes since the monarchy era had made country dependent,” he said.

He said the late president sacrificed himself while safeguarding the legitimacy and safety of Egypt.

“Morsi’s martyrdom proves the complicity of a regime that after eight years did nothing but killing, arrest, impoverishment, corruption, normalization, and subordination,” he added. The activist further said that he does not see the possibility of any hope for the country over the next 10 years.

Born on Aug. 8, 1951, in the village of El-Adwah in northern Egypt’s Al-Sharqia governorate, Morsi co-founded the Freedom and Justice Party, the political arm of the Muslim Brotherhood, as well as the Democratic Alliance, an umbrella of many parties.

He grew up in a simple farming family. He married in 1978 and has five children and three grandchildren.

On April 30, 2011, the Shura Council of the Muslim Brotherhood elected him as chairman of the Freedom and Justice Party alongside Issam al-Erian as his deputy and Mohammad Saad Al-Katatni as party secretary.

After being deposed, which also ended Egypt’s short experiment with democracy, he faced six charges including jailbreak, murder, spying for Qatar, Hamas, and Hezbollah, insulting the judiciary and involvement in “terrorism.”

His family petitioned many times local and international organizations pointing out his worsening health condition. Many people had also appealed and stressed on Egyptian rulers to attend to his health. But, all the requests were ignored by the Egyptian authorities.

Even the UN High Commissioner for Human Rights described the death “a state-sanctioned arbitrary killing”.

“Morsi was held in conditions that can only be described as brutal, particularly during his five-year detention in the Tora prison complex,” said the statement from the office of the UNHCHR.

Amnesty International had denounced the court process as “a charade based on null and void procedures”.

As details came out, he was allowed to speak for seven minutes from inside the glass box before the court proceeding were adjourned. He is reported to have concluded with a verse from a poem that reads “My country is dear even if it oppressed me and my people are honorable even if they were unjust to me.”

His supporters say that his words will continue to haunt the Egyptian regime and those who did not allow democracy, still in its infancy to breathe and take roots to allow people to choose their rulers.