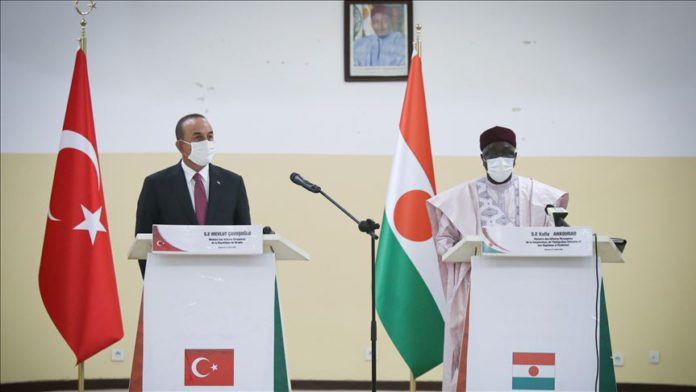 Those seeking a military solution in Libya will be frustrated, as only a political solution will work, Turkey’s foreign minister said on Tuesday in the West African country of Niger.

“The only solution in Libya is a political solution. We’ve been saying the same thing since the beginning,” Mevlut Cavusoglu told a joint press conference alongside his Nigerien counterpart Kalla Ankourao in the capital Niamey.

“Up to today, those who preferred a military solution were defeated in the field and failed,” said Cavusoglu.

He added that those who turn their back on a political solution in Libya should know they do so in vain: “There is no other way.”

Since April 2019, Libyan warlord Khalifa Haftar’s illegitimate forces have launched attacks on the capital Tripoli and other parts of northwestern Libya, resulting in more than 1,000 deaths, including civilian women and children.

Touching on the meeting with his Nigerien counterpart, Cavusoglu said that the two countries are ready to boost bilateral relations in various areas, including agriculture, mining, energy, industry, and trade.

Turkey will support Niger’s fight against terrorism as the agreements the two ministers reached today are based on this purpose, he added.

After defeating a 2016 coup attempt by the Fetullah Terrorist Organization (FETO), the Turkish government set up the Maarif Foundation to give responsible administration to overseas schools linked to FETO, which the terror group uses as a revenue stream.

He added that Turkey will also provide training for Nigerien diplomats and healthcare workers.

Cavusoglu also congratulated Niger on the country’s election as a non-permanent member on the UN Security Council for a two-year term.

Following talks in Togo on Monday, Cavusoglu arrived in Niger — just south of Libya — on the second stop of his three-nation West African tour, to conclude with Equatorial Guinea.

Earlier today, he had talks with Nigerien President Issoufou Mahamadou, and later will meet with Brigi Rafini, the country’s prime minister.

Under President Recep Tayyip Erdogan’s leadership, Turkey has pursued an unprecedented outreach to Africa based on the principle of win-win.

Turkey’s presence is felt across the continent, where there are a number of Turkish organizations, including the Turkish Cooperation and Coordination Agency (TIKA), Maarif Foundation, and Yunus Emre Institute, among others.

November 28, 2020
ANKARA  - Anadolu Agency is here with a rundown of the latest developments on the coronavirus pandemic and other news in Turkey and around...

November 28, 2020
TEHRAN Iran's Supreme Leader Ali Khamenei has condemned the killing of the country's top nuclear scientist and called for action against the perpetrators. In a statement...